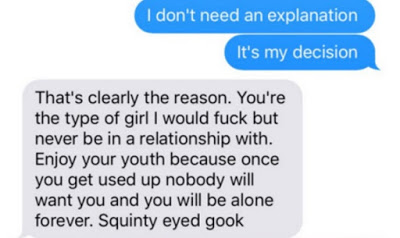 A viral tweet of a recent text message exchange shows just how horribly some men can react when they’re denied sex.

Earlier this week, a Twitter user named @araferal tweeted out a text message exchangebetween her unnamed female friend and her female friend’s date. After the woman says no to sex, however, the man becomes wildly hostile and even uses a racial slur against Asians to describe her: TWITTER – TWITTER.COM
The man goes on to complain about having to buy this “poor ass” woman’s drinks, among other things, and he blames her for not meeting his “manly needs”: The man continued berating the woman for saying no to sex, insinuating that no “quality guys” would ever really want her: TWITTER – TWITTER.COM
The tweet of this insane text message exchange has been retweeted nearly 12,000 times and liked nearly 15,000 times as of writing this piece, and many people have called out the unidentified man for his abhorrent response to being denied sex.
COURTESY : ATTN
Continue Reading
Advertisement
Related Topics:Articles, Entertainment