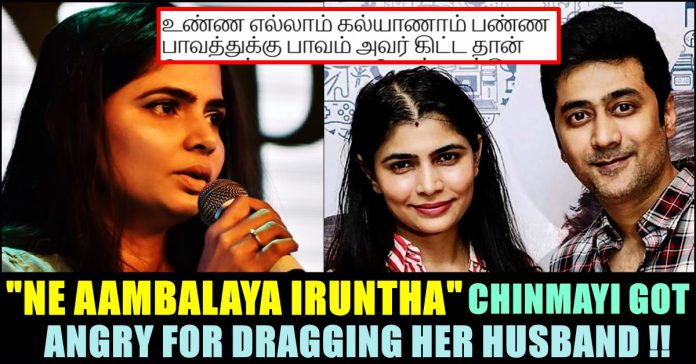 Chinmayi never thought of sparing their enemies in Twitter. Starting from Vairamuthu against whom she has been complaining about sexual harassment to a random guy who abuses her in Twitter, Chinmayi gave it back to almost every one of them.

Recently, the actress shared a picture of a misogynist slogan carried by a government bus in Coimbatore. The slogan which was hanged at the top of driver said that it is not an eye’s fault to see a woman but the woman’s fault for making him see her.

On sharing this picture, Chinmayi who is known for the awareness she created through Me Too movement, wrote “Coimbatore 1C Private Bus Message for women. How misogyny writes placards to shame women :)” in the caption.

Many of the men who saw this post of Chinmayi, confronted with her and started arguing with the singer. While others criticized the opinion of Chinmayi, one of her follower mentioned Chinmayi’s husband Rahul ravindran and posted an insensitive comment.

On seeing this comment from the suer, Chinmayi who got irritated asked him to deal with her directly if he is a man instead of tagging her husband. “I can see how your father treated your mother by the way you are behaving now” she added.

To this reply of Chinmayi, the user further added that her husband is the right person to talk for marrying Chinmayi. He even asked Chinmayi to stick to singing.

Here’s how Chinmayi replied to this comment of him :

Apart from her dubbing works and singing works, Chinmayi is highly recognised by the Tamil cinema audience for her existence in social media. Her recent notable film as a voice artist was “96” in which she lend her voice for actress Trisha. Being a representative of South India for Me Too movement, Chinmayi is one of the very active celebrities who interacts with her followers often.

What do you think on the way Chinmayi handled the Internet user ??

Followed by the inauguration of Late chief minister J. Jayalalithaa's memorial building near Marina beach, her residence "Vedha Nilayam" was unveiled today as a...