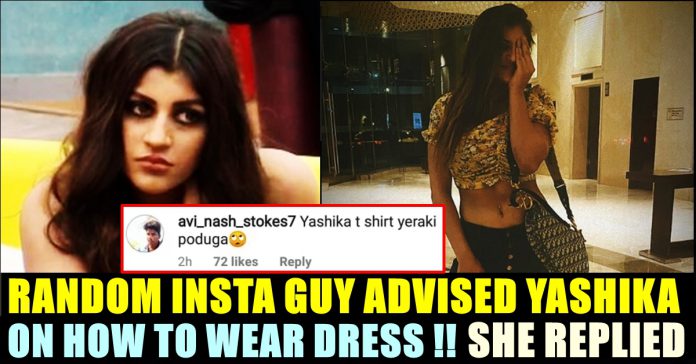 It seems there is no ending for online criticisms spewed on the attires of cinema celebrities, especially on female celebrities. Recently, an Instagram using young guy made a comment on popular actress Yashika’s clothes. Yashika who is known for her outspoken attitude, immediately replied to him with a light manner.

She is one among the several actresses who are very much active in social media platforms, especially in Instagram and Twitter. The actress who enjoys 15 lakh followers in her Instagram, never missed to update about her daily routine in the photo posting social media platform. Recently, she posted a picture of herself with a caption saying “I love you 3000 😍”

Liked by more than one lakh Instagram users so far, this post is receiving several comments from her followers as well. Though many of her fans lauded the actress for her post, few of her followers didn’t feel right about her attire and pose, started making fun of it and raised question against it as well.

“Try traditional looks!❤️” asked one of her follower whereas the other one asked her to expand the length of her T shirt. Yashika who made it to news several times previously for her savage comments, said that she posted many pictures of herself in traditional looks in her Instagram profile to the one who asked her to wear traditionals.

“check my profile I’ve posted many pictures in other traditional attire’s . Sad to see this post got your attention 😅” she wrote. Check out the screenshot of her reply below :

Followed by this, Yashika took time to reply to the one who asked her to increase the length of her T-shirt, the actress said that it is not a T-shirt but a crop-top. Here’s the screenshot :

Comment your views on these replies made by Yashika !!

Vaishnavi Herself Exposed The Abusive Comments She Received For Wearing Swimsuit !! Check What She Has To Say To Them !!