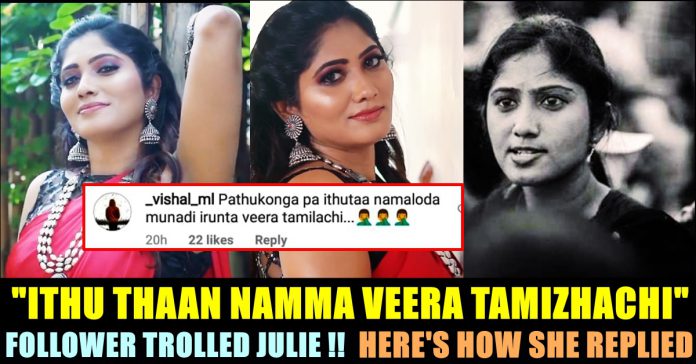 Bigg Boss fame Julie uploaded a reel in her official Instagram account and replied to an online user who trolled her for the clothes she wore in the video. On seeing her reel, the user whose handle name read as Vishal mocked her by saying that she is the “Veera Tamizhachi” we all celebrated in the past and the aspiring actress replied to him saying that clothes doesn’t decide one’s bravery but facing trolls for four long years does.

Julie who is known among Tamil audience for her stint in Bigg Boss season one, is pretty much active in social media platforms for past few days. The aspiring actress is busy uploading pictures from her photoshoots, reel videos etc and she is also involving herself in giving back to her haters who are spewing hatred at her.

On Monday Julie uploaded an Instagram reel in her official Instagram account and wrote “Confidence is beautiful no matter your size no matter your weight be confident in who you are and you will be beautiful” as her caption.

On seeing this post, an Instagram user named Vishal mocked her by saying that she is the one whom we celebrated as “Veera Tamizhachi” (Brave Tamizh woman). Replying to him, Julie said that bravery doesn’t lies on the clothes one wear and said facing trollers like him for the past four years is real bravery.

To a follower who trolled her based on her behaviour in the Bigg Boss show, Julie replied saying that it’s just a show and asked the online user to grow up.

One more follower wanted Julie to reduce her weight and she replied to him saying that it is for a film and she will reduce it once the film’s done.

Being a nurse by profession, Julie acted in short films and music videos before entering Bigg Boss shows which are available in youtube. After getting participated in the Bigg Boss show, the people’s way of seeing Julie changed completely. Julie became the first victim of Bigg Boss’s “Kurumpadam” which is used by Kamal Haasan to reveal an individual’s original behaviour. However, after seeing the “Kurumpadam”, Julie alleged that 5 seconds of her video footage is missing from it. Now, Julie, through her Instagram bio, identifies herself as an actress, model and environmentalist.

Previous articleShankar Officially Announced About “Anniyan” Remake With This Hero !! Check Reactions
Next articleSamantha’s Fitting Statement To Media For Demanding Actors To Have Opinion !! WATCH

Finance Minister of Tamil Nadu, P Thiaga Rajan has been targeted by the Ex-Minister D Jayakumar on Twitter. D Jayakumar from the opposition party...

Diwali is a prominent seasonal festival in India. Nearly a billion people worldwide participate in the Diwali celebration and almost a dozen countries officially recognize it as...

Dale Steyn Got Thrashed By Indian Fans For This Tweet About Bumrah !!