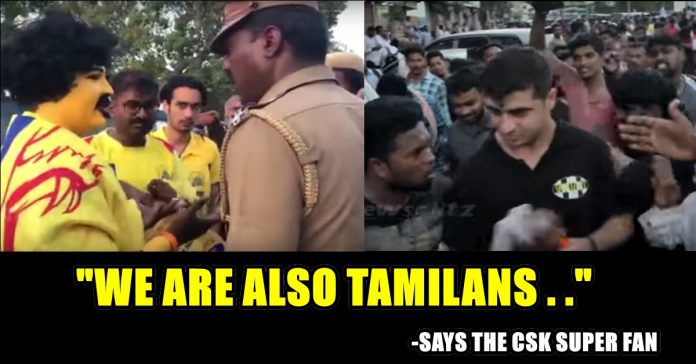 The IPL match between Chennai Super Kings and Kolkata Knight Riders was conducted at the MA Chidambaram Stadium on Tuesday even as protests erupted in parts of Chennai over the Cauvery water dispute.

Right from afternoon, hundreds of policemen stood guard at Chennai’s Anna Salai, anticipating protesters who wanted the IPL match between Chennai Super Kings and Kolkata Knight Riders at the MA Chidambaram stadium on Tuesday cancelled. Many political groups had announced earlier itself that they would oppose the matches being conducted at a time when the state was protesting against the centre’s indecision in forming the Cauvery Management Board.

However, what came next is what is widely being regarded as a failure of intelligence. Several groups including the VCK, Naam Thamizhar, SDPI, came in troves and descended at the Anna Statue on Anna Salai. The police jumped into action, putting barricades to cut off their onward march towards the stadium. But protesters jumped over barricades and fell on the police and media personnel on the other side.

Staunch Chennai Super Kings (CSK) supporter and team mascot Saravanan Hari, known for his characteristic yellow-paint look at IPL games, was attacked by a group of protesters outside MA Chidambaram Stadium in Chennai on Tuesday.

Saravanan who was outside the stadium ahead of the franchise’s first home IPL game of the season claimed that a group of people ganged up on him and hit him outside a jewellery shop near the stadium.

The videos telecast on various news channels showed how CSK fans were attacked and some were forced to remove their jerseys.

“We are CSK fans, we are also Tamilians. We also want TN to get Cauvery water. But we are for the cricket match. I want to tell Seeman that what his party cadre did was not right. Theatres are running movies, will you stop it? I am ready to donate one day salary for Cauvery. The people who assaulted me should know I am a Tamilian like them,” Saravanan Hari said.

Saravanan is considering taking legal action against the group of attackers after the match. A few minutes into the game, one of the protesters threw a pair of shoes into the stadium.