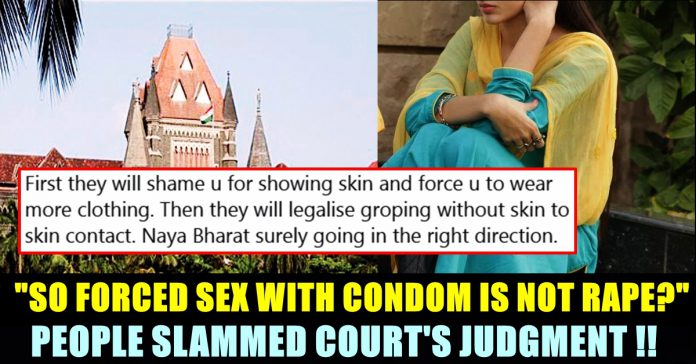 Bombay high court’s observation on a child molestation case has created huge outrage in social media platforms. Justice Pushpa Genediwala said that groping a child’s breasts without “skin-to-skin contact” does not amount to sexual assault under the Protection of Children from Sexual offences Act. The Nagpur Bench of the court concluded that it would fall within the ambit of Section 354 of the Indian Penal code which criminalises the modesty of a woman.

A 39 old man was arrested for sexually assaulting a minor girl. he reportedly taken a 12 year old girl to his house on the pretext of giving her guava, and had pressed her breast, and tried to remove her salwar, according to reports. After getting convicted by the trial court for offences punishable under POCSO Act and the IPC, the accused approached high court, challenging the conviction. Justice Pushpa Ganediwala’s single bench made the observations.

On 19th of January, while hearing, the High court questioned whether the man’s pressing of child’s breasts without removing the top would fall within the definition of “sexual assault” under Section 7 of POCSO act. “Admittedly, it is not the case of the prosecution that the appellant removed her top and pressed her breast” it said. “As said there is no physical contact that is skin to skin with sexual intent without penetration” it added.

Based on the definition, the court concluded that a person, to be punished under the law, should have committed a crime that involves the details mentioned. To be held guilty under this law, the act would have to be committed with sexual intent and it must involve “touching the vagina, penis, anus or breast of the child or any other act which are similar to the acts mentioned in the provision.

The bench said “The act of pressing of the breast of a 12 year old child, in the absence of any specific detail as to whether the top was removed or whether he inserted his hand inside the top and pressed her breast, would not fall under sexual assault” and concluded that it would fall under Section 354 of the Indian penal code.

Section 7 of POCSO act demands the accused to serve a minimum of three years jail sentence whereas Section 354 of the Indian Penal code prescribes minimum sentence of one year. Justice Ganediwela who said that the punishment for an offence should be proportionate to the seriousness of the crime, acquitted the accused under POCSO act while upholding his conviction under section 354 which is related to outraging the modesty of a woman. The court forfeited the accused’s bail bond and and issued a non-bailable warrant against him.

However, this judgement from the court has created huge outrage in social media platforms with people expressing their disagreement over it. Check out some of their reactions below :

If absence of skin to skin contact is not groping, then forced vaginal insertion by a condom wearing male organ need not be rape!

Look! They’re trying to justify harassment again! <3
By this logic punching someone in the face while wearing gloves is not assault and using protection while having sex is not actually having sex cause no “skin to skin contact” was made 😀 pic.twitter.com/KhQUExe17N

Today is "Girl Child Day".
The Bombay High Court says "Groping a girl below 12, without a skin to skin contact is not a sexual harassment".
Great going "New India".#NationalGirlChildDay2021

Bombay High Court needs "skin to skin contact" to consider groping as a sexual offense, and today is supposed to be National Girl Child day. WHAT A JOKE.

First they will shame u for showing skin and force u to wear more clothing. Then they will legalise groping without skin to skin contact. Naya Bharat surely going in the right direction.

Imagine being educated, being a judge in High Court and stuff and still saying shit like skin to skin contact necessary for it to be considered as sexual assault. Fucking disgusting.

Kick a guy in the nuts when he's got his pants on. No skin to skin contact that way. https://t.co/txLu5DncmF

Not many days ago, a public speech of Jyothika created huge controversy among the social media users which resulted in actor Suriya releasing a...