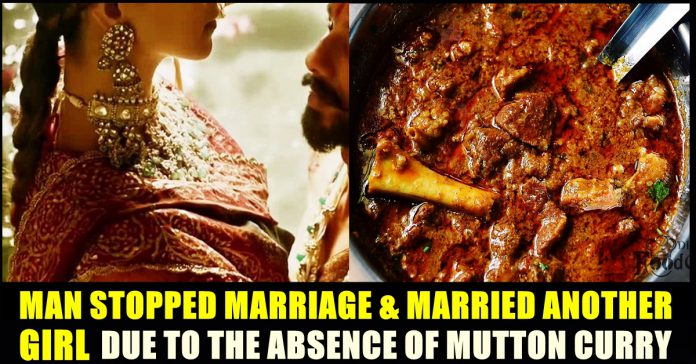 We have seen marriages getting stopped due to various reasons all these years. But stopping a marriage ceremony which is made of huge money, due to the absence of mutton is something we haven’t heard of, ain’t it ? Reports on a man walking out on his bride on the main day after her family failed to serve mutton in the feast has emerged. The incident reportedly took place on Wednesday and has made headlines.

Ramakant Patra, a 27 year old man, married another woman of the area before returning home. The incident created waves in social media platforms with people reacting to it in various ways. On Wednesday afternoon, a resident of Rebanapalaspal in neighbouring Keonjhar district reached Bandhagaon village in Sukinda block with baraatis in a procession to marry. After reaching the venue, they were welcomed by the bride’s family and after necessary rituals, taken to the dining hall for lunch.

While the food was being served, members of the wedding party demanded mutton curry. On seeing the food item not prepared, the baraatis entered into an argument with the bride’s family members and those serving food. The situation turned ugly and soon the argument became ugly. When the groom came to know that the mutton had not been prepared, he reportedly called off the marriage to everyone’s shock.

Despite the members of the bride tried to convince him by pleading him, he left the place. He who didn’t change his mind, left the place with his relation. Patra reportedly went to a relative’s house at Gandhapala village of Kuhika panchayat in Sukinda where they stayed for the rest of the day. He also married another woman of Phulajhara in Tamka the same night before returning to Keonjhar. No Complaints were made against any individual in connection to the incident, said reports.

Users of Twitter and other social media platforms condemned the groom who behaved in a regressive way as such incidents were reported in 1980s.

A groom from Odisha walked out of his wedding after the baraatis were not served mutton curry on Wednesday. Seriously ? He married another woman later that day.
What a bløõdy AH 😡. Breaking a girl's future, her dreams & her family's honour just for meat ? MCP material

Apart from the bunch of cinema celebrities who visited their wedding in person and wished them with their whole heart, a number of celebrities...