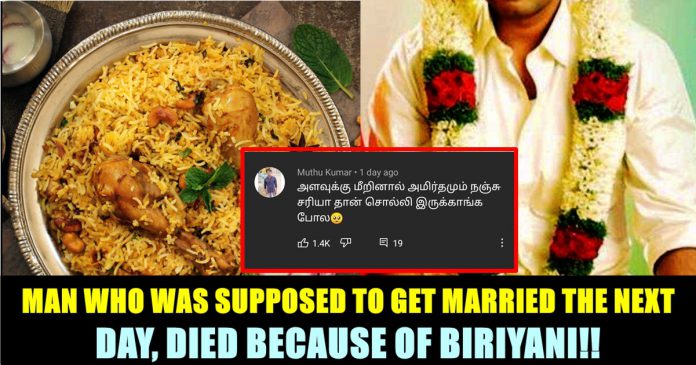 Groom Died Because Of Biryani !! Biryani Lovers Are In Shock!!

Are you a biryani lover? Here is a piece of shocking news for all the biryani lovers. A young man who was about to get married, died due to overeating biryani.

If you think about non-veg food, the first thing that comes into your mind is obviously biryani. Though nowadays one could find various kind of biriyanis, non-veg biryani is loved more by many biryani lovers. Biryani is a mixed rice dice made with spices, rice, and meat. This tasty recipe has originated among the Muslims of the Indian subcontinent, which is more popular in South India.

Chandran Mohan was from Thallatheru In Karaikal. He was working as a daily labour at his native. A few days ago he had his engagement to a girl in Vizhithiyur. He was about to get married tomorrow which is 26th of August 2021. To celebrate his upcoming marriage event, the youth decided to eat his favourite food Biriyani at a local shop.

Like all the biryani lovers, Chandran Mohan too loved eating biryani. And it is reported that he often eats biryani as it was his favourite food. The excitement of his wedding made him to eat a sum of biryani which was later been a cause of his death. He went back home and slept after eating an excess amount of the food.

Chandran Mohan’s mother tried to wake him from sleep at the morning. But she could not succeed in waking up as Chandran Mohan passed away while sleeping. He was taken to the Karaikudi Government Hospital for post-mortem.

The Post-Morten reports say that the cause of his death is overeating of biryani. The food pipe (oesophagus) and windpipe (trachea) got stuck with the overload biryani. This caused him a heart attack during his sleep. This news is going viral among biryani lovers and foodies.

Not only biryani but overeating of any food is not recommended. There is always a limit to everything. To go beyond that limit is like risking ourselves. Sleeping immediately after the intake of food is also not good for the health. It is better to avoid heavy food before sleeping or should be awake at least an hour after the intake of heavy food.

There are both funny as well as shocking comments posted below the Youtube video. Listed below are a few of the comments.

A user with the name ‘Hello#’ commented, “Biryani was only eaten on special occasions or once or twice a year in the past.  Now people are eating it on a daily and weekly basis which is really bad for healthy living.  I am not sure if it is clever marketing or people have gone lazy to cook nutritious traditional local Bharat food. Biryani is like KFC or McDonald’s.”

Another use with the name ‘Im Always Happy Ever and Forever’ commented, “Ippadi sonna briyani separate vidruvoma yenne?? 🤔🤔 No no no… Briyani onnu parcel….😋😋”

At the end of the day, a person has died. Logically life and death are not in your hands. Still, you should stay healthy as much as possible to make your life easy.

Previous articleBalaji Murugadoss Replied To Followers Who Trolled His Physique ??
Next articleTop-Tier Celebrities Raised Voice For Arivu After He Got Sidelined By “Rolling Stone Magazine”

“Smithika is so matured, she is the one who advising us and she also the one who is so emotional who will shed tears...