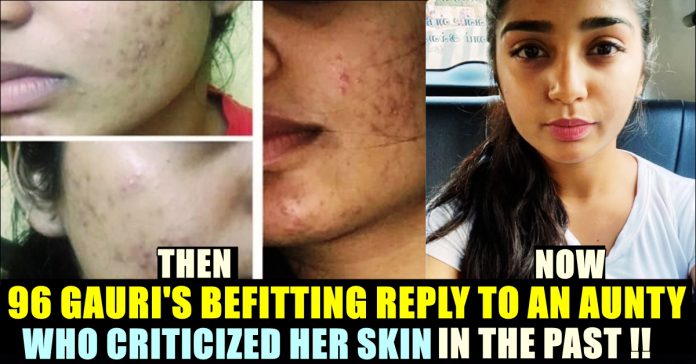 Woman receiving criticisms based on their looks from a fellow woman is something that is taking place since stone age. In this internet era, mocking someone for their looks became worse, especially when it comes to cinema celebrities, people are effortlessly throwing shade on them whenever they feel like it. Actress Gowri Kishan who is known for appearing in “96” movie as junior Jaanu, shared one such incident she went through in her real life to her 6 lakh followers.

It all started when Gauri posted a picture of herself with face pack on. On seeing her story, many of her followers asked the actress to share her skin care routine. In a way of answering to all of them, Gauri said that she doesn’t have great skin and struggled with it for more than 2 years. the actress went on to reveal how hard it was for her to go through that phase.

She said that she took treatment from a low-key dermatologist in Bangalore to get a manageable skin. The actress said that she is going to share about her experience to those who are struggling with self esteem issues due to their unhealthy skin which she had a year ago.

Gauri who worried with the fact that she hasn’t blessed with her mother’s “bombass skin”, said that she used old makeup products for a dance performance in her college. “This was especially when I was just getting used to the “heroine/actress” tag and many people probably wondered what kind of actress has shit skin like this” Gauri wrote in her to depict that her self esteem hit majorly at that time.

Further Gauri shared a bunch of selfie pictures of herself which she sent to her mother and cried worrying about her worst skin. The 24 year old actress says that the pictures were captured before “Ethnic Day” in her college which is a day dedicated to dress-up and take pictures all day. “I remember sending this picture to my mum, and crying to her on the phone” her post read.

After that, she shared the pictures she sent to a dermatologist while being in Delhi for “Master” shoot. Gauri revealed that her lifestyle, stress, constant travel shuttle, continuous exposure to make up for shoots and lack of sleep caused her the trouble.

After all these efforts, the actress’s skin started behaving normal. she says by sharing a set of recent pictures. “Even then, I have to admit that I have been guilty of resorting to filters and editing apps to hide the acne” she said.

In her next story, Gauri shared a recent selfie picture of herself which was captured in January. She says that the wore no make-up for that selfie and suggested her followers to have faith and fix their lifestyle to the best of their ability. “It was result of consistent self-talk and more importantly result oriented action” she said.

Finally, Gauri added a happiest picture of herself and asked her followers not to beat themselves up too hard and advised them not to use whatever that is shown in social media. “never forget that you live most of your life inside your head, so make sure it is a good place” she said.

In her last story, Gauri remembered of a tailor aunty who criticized her for her bad skin. “you’ve got a good hair, but what about your skin ?” the aunty asked Gauri. The actress says that she still remembers that and requested her followers to accept each other. “If you notice a flaw in someone else and know for sure that it can’t be fixed in less than 10 seconds, don’t bother telling them? It will be better left unsaid. Normalise acne” she said.

A viral video that claims Azeem used the word "Condom" to Sherina who entered the house for the second time as a guest is...

The number of abusive texts and posts that are being created against female celebrities in social media platforms are increasing in vast number. Knowing...