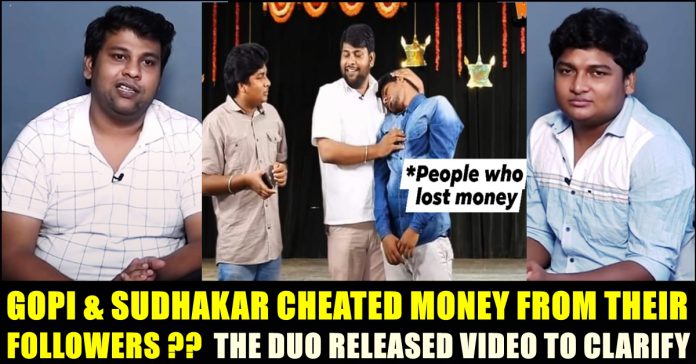 “Parithabangal” fame Gopi and Sudhakar came up with a clarification video in their you tube channel to brush off the allegations that were made against them on misusing the money of their subscribers. Jason Samuel who is known for exposing social media influencers for cheating the money of the start ups and Madan OP for abusing his female subscribers, came up with a video in his you tube channel, reporting about Gopi and Sudhakar.

The duo has been accused of promoting Fundmelon Superbacker app in their channel videos which promises that people will get 1% of the money they are investing in daily manner. It has been reported that Gopi and Sudhakar had promoted the app in many of their videos which made people to invest in the app. However, it turned out that the people who invested the money couldn’t get their money back. When questioned, the youtubers reportedly avoided answering the questions of the people who invested money and removed the promotional parts in their videos.

A sum of 800 individuals got cheated in the alleged scam and Jason Samuel collected the information of 100 people. It has been reported that a total of Rs. 10-15 crores of people’s money were swindled. The video released by Jason strongly connects Gopi and Sudhakar with the scam. In a way of replying to the accusations, Gopi and Sudhakar released a video in their official youtube channel.

Starting the video by saying “Subscribers Thunai” (Subscribers are our support), Sudhakar says that he never expected the questions that were raised against them regarding the crowd funding they were involved in for making a movie to turn into accusations. “As it turned into an accusation, we must give clarification to it.” Sudhakar said and went on to open on the connection between their channel and Superbackers.

“Superbackers approached us to make an advertisement. We advertised for them how any other you tube channel would do. That’s the only relationship between us. We have nothing to do with what they did with their business and their activities.” Sudhakar says with Gopi adding “We don’t even know about their business activities”

Sudhakar goes on to add about the crowd funding they did from their followers to make a movie. “Ever since we started the project, they are involving it as an added issue whenever a problem comes to light. Even if anyone else gets into a problem, they are dragging us and involving us in it. After starting the project, we didn’t get ourselves committed in any other movies and are fully focussed on completing it” the duo could be seen saying the video.

“Once the teaser of our film gets released, you (subscribers) will come to know why we delayed.” said the duo who cited the COVID 19 interruption for the delay in their production.

“We don’t want people to get disappointed after watching our film. We want to prove us by releasing the film we aimed for so long” Sudhakar said in the video.

Watch the accusation made by Jason Samuel below :

A video of a young girl performing Tik Tok video with India's national anthem running in the background is going viral in the social...