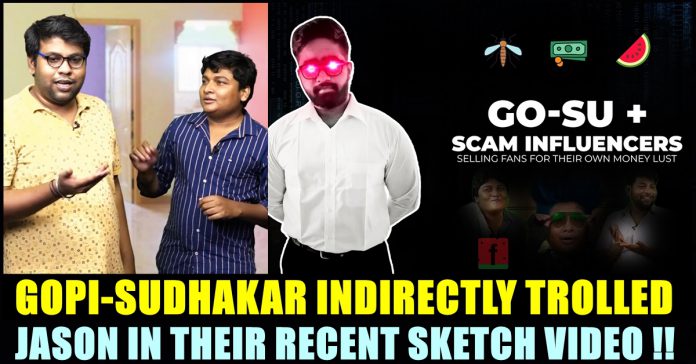 Gopi and Sudhakar, popular youtubers of “Parithabangal” fame, replied to the accusations that were made against them through their recent sketch video. After releasing a 4 minute long video giving clarification regarding the accusations that were made against them, the duo trolled Jason Samuel, an Entrepreneur who brought the matter into the light by releasing a 2 hours and 30 minute long video. Jason, after the release of Gopi-Sudhakar’s sketch video, uploaded a post in his Instagram handle, saying that he will reply to their video and added that it will be the “End”.

Days ago, Gopi and Sudhakar came up with a clarification video in their you tube channel to brush off the allegations that were made against them on misusing the money of their subscribers. Jason Samuel who is known for exposing social media influencers for cheating the money of the start ups and Madan OP for abusing his female subscribers, came up with a video in his you tube channel, reporting about Gopi and Sudhakar.

The duo has been accused of promoting Fundmelon Superbacker app in their channel videos which promises that people will get 1% of the money they are investing in daily manner. It has been reported that Gopi and Sudhakar had promoted the app in many of their videos which made people to invest in the app. However, it turned out that the people who invested the money couldn’t get their money back. When questioned, the youtubers reportedly avoided answering the questions of the people who invested money and removed the promotional parts in their videos.

A sum of 800 individuals got cheated in the alleged scam and Jason Samuel collected the information of 100 people. It has been reported that a total of Rs. 10-15 crores of people’s money were swindled. The video released by Jason strongly connects Gopi and Sudhakar with the scam. In a way of replying to the accusations, Gopi and Sudhakar released a video in their official youtube channel.

After grabbing the headlines with the clarification video, the duo came up with a spoof of the whole situation to make another reply. In a way of replying to accusations, Gopi said that legal actions are being taken by the Police officials. “I don’t have anything to tell about it further” Gopi says to Sudhakar who in believed to be imitating Jason Samuel.

Gopi further answered to those who demanded the address of their office. “We have uploaded many videos, trolling celebrities. How could we share our office address. Though we haven’t shared the address, we have made tour videos of our office and shot many videos in it.” Gopi says. When Sudakar asks how “Parithabangal” swindled Rs.70-80 crores, Gopi sarcastically says that it is not Rs70 crores but Rs. 2500 crores. He further iterated that couple more youtube channels promoted the app.

“I did see their reply video. They will do get my reply. And it will be the end. Bye” Jason Samuel’s post read, caption of which said “They had a choice. And it was the truth. Now it will come out.”

Previous articleShanthanu Reacts To The Negative Comments That Surfaced In His Recent Post !!
Next articleYouth Proposed To Khushbu On Seeing Her Massive Transformation!! Here’s How She Replied

During the finals of Bigg Boss season four, Kamal Haasan launched his own fashion brand called "House of Khaddar" through which he is going...