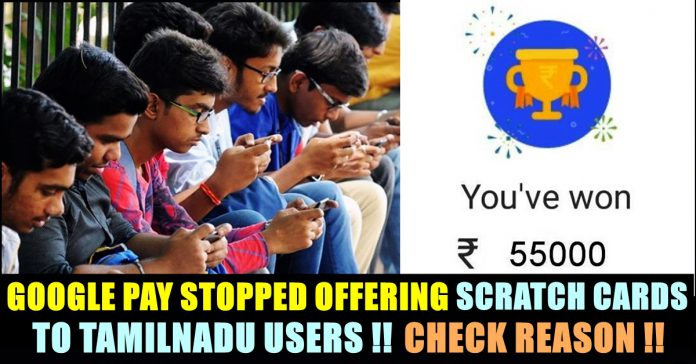 As we all know, Google Pay is used to send money to or receive it from others through our smart phone. Once the transaction is done, every time a person will get a Google Pay Scratch Card in his Rewards section. By following the instructions provided by the app, a person can see if he wins a cash prize by luck or not.

Now to the shock of Tamilnadu citizens who are using Google pay frequently, there will be no more Scratch offers for them to Scratch. Not only Scratch cards, it has been informed that there will be no reward for the Tamilnadu people in any form such as Diwali Stamps etc.

The reason behind it is nothing but the decision made by the state back in 2003. According to reports, Google Pay violates the lottery ban rule in Tamil Nadu. In 2003, Tamil Nadu’s former chief minister J Jayalalithaa cracked down on the sale of all forms of lotteries across the state, including online, in an attempt to keep people away from gambling.

The reports suggests that the state authorities firmly believing that Google Pay works similar to lottery ticket as it instigates a person to take chances for reward. This decision from the state might reduce the usage of the app in big time as Tamilnadu is one of the most populated state in India.

However, Google argues restricting digital products on the grounds of a lottery ban is not as simple as imposing restrictions on a physical (offline) distribution networks, citing ‘global scope’ for digital products. The search giant also added altering consumer experience for select users is ‘far more complicated’ since that user experience is delivered on mobile devices which is accessible from anywhere in the country.

It is highly believed that Google pay rewards is one of the main reasons which makes people to make frequent transactions in the particular app. Now as the app is going to restrict the rewards, we can expect a downfall in near future in Google pay usage.

Previous articleVairamuthu As Chief Guest Along With Rajinikanth ?? Chinmayi Reacts !!
Next articleThis Popular Anchor Gets An Important Role In Thalapathy 64 !! UNEXPECTED !!

Cheran Promoted His Film By Doing This ?? Check His Clarification

Director Cheran who is known for making quality films in Tamil cinema, has appeared in a film named as "Rajavukku Check" as protagonist. Along...