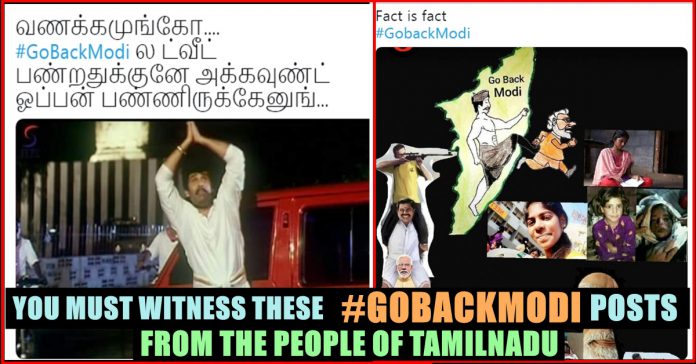 In a major embarrassment for Prime Minister Narendra Modi and the ruling BJP, #GoBackModi is trending on Twitter ahead of his visit to Madurai in Tamil Nadu on Sunday for the foundation-laying ceremony of the AIIMS hospital.
A majority of tweets contain a cartoon that has an outline of Tamil Nadu with the face of late rationalist leader EVR Periyar saying “Go Back Modi”. The Prime Minister, shown in a saffron jacket, is running towards a ladder lowered from a hovering chopper. 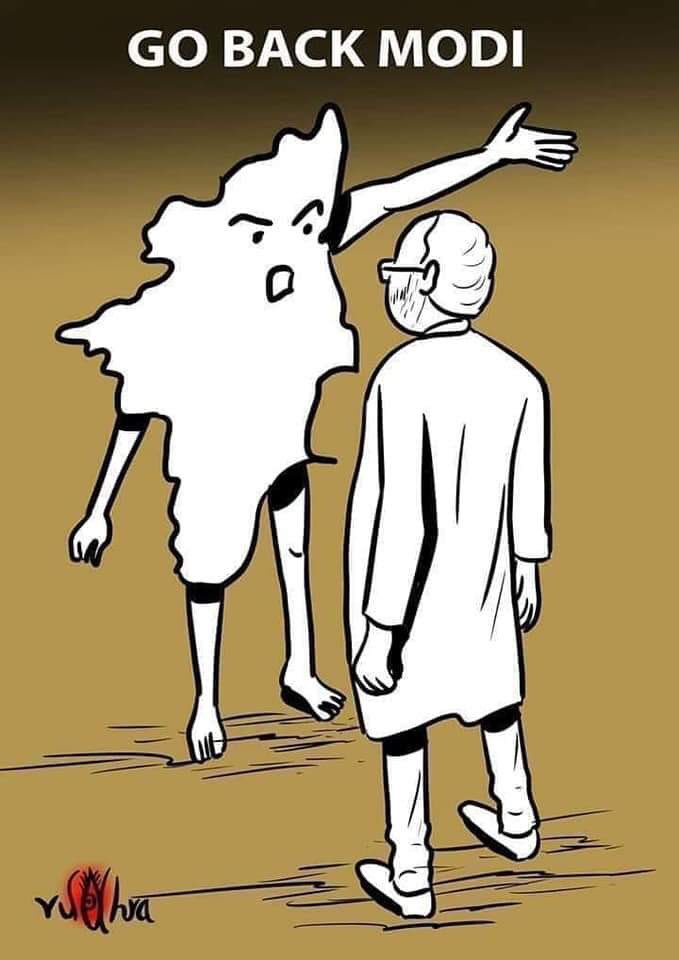 The posts largely reflect the state’s anger over the central government’s alleged failure to help people after cyclone Gaja ravaged many districts left more than 3 lakh homeless and uprooted around 11 lakh trees crippling the livelihood of a huge population. Check out some of the posts here :

#GoBackModi
Don’t come to TN. Go back to mars pic.twitter.com/xgt3hkANot

No place for Facist like Modi, RSS, BJP. #GoBackModi pic.twitter.com/FdbEEcCSiW

#GoBackModi this has to be said in every city, town and village. To send a powerfull message that there is no free public space available for fascists to spread their hatred. pic.twitter.com/j5k8kq4hIq

#GoBackModi you never consider TN as an integral part of India. Why do you came for our votes. Tamils never ever support BJP&RSS. pic.twitter.com/GgyVZM5LuF

We know periyar, annal and Marx. Who are you man? #GoBackModi pic.twitter.com/Ho0uO5bAkg

Bakthas be like after #GoBackModi trends India top level 🤣🤣😝😝 pic.twitter.com/24bQCeQ1Qk

Modi ji is landing in Tamil Nadu tomorrow. Tamil Nadu started trending #GoBackModi . When he visited last time #GoBackModi was a global trend! Lies, rhetoric & Photoshop can never cheat us. Proud to be a Tamilian.

My husband is sharing all FB memes with me 😂😂

This is going to fun night for both of us 😂😂 pic.twitter.com/9wgzdAZ5ld

Do you have any reason to like him? #GoBackModi #GobacksadistModi pic.twitter.com/UC6avAVLaR

#GoBackModi
You shamed our farmers and treated us like secind class citizens #GoBackModi#GobacksadistModi pic.twitter.com/pXR8h7DYWz

The Modi government has been undeniably and gravely harmful to our nation’s health. On every conceivable metric, it has failed and every single citizen has had to pay a heavy price for the Modi brand of misgovernance.#GoBackModi #GoBackSadistModi #GoBackPoliticalBroker pic.twitter.com/S3CtvCG9BU

This is the second time that the Prime Minister is facing this kind of an online backlash. In April last year, when he had visited Chennai for the Defence Expo, #GoBackModi had trended. Hundreds of protesters belonging to opposition parties had let black balloons in the air then.

The Prime Minister had to use a chopper to attend an event at the IIT Madras to avoid protesters. At the time, the centre’s alleged delay in constituting the Cauvery Management Board in view of the Karnataka assembly elections had triggered the anger.