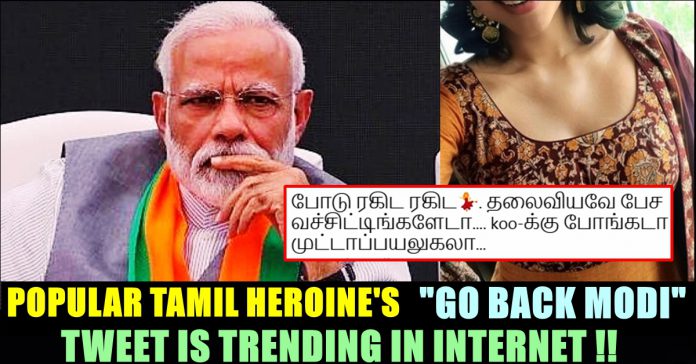 “Go Back Modi” Tweet Of This Tamil Heroine Is Trending !!

Ahead of Prime Minister Narendra Modi’s visit to Tamil nadu on February 14, hashtag “Go Back Modi” is trending in the micro blogging social media site with tweets condemning the entry of the former Gujarat Chief minister. Among the several tweets which were posted with the hashtag “Go Back Modi”, a tweet uploaded by former Bigg Boss contestant Oviyaa is trending in the Internet with large number of reactions.

It is reported that Prime Minister Narendra Modi is going to visit Tamil Nadu and Kerala on February 14 to lay the foundation stone of multiple projects. One of the key highlights of PM Modi’s visit is going to be the handing over of the Arjun Main Battle Tank (MK-1A) to the Indian Army, at Chennai. It is notable that the tank has been indigenously developed in India.

Several other important events are also going to take place in Tamil nadu and Kerala. However, users of Twitter, expressing their displeasure over the Prime minister’s arrival, has been trending the hashtag “Go back Modi” in Twitter. Among all the tweets, a tweet uploaded former Bigg Boss contestant and actress Oviyaa who was born in Kerala and working in Tamil nadu is going viral among the twitter users.

She who is known for her bold opinions and honest behaviour inside the Bigg Boss house, gained a huge fan base through the reality game show. Now, responding to the trending hashtag, Oviya uploaded a tweet saying “#GoBackModi”

The tweet garnered huge reception in no time with 10k plus likes and 3k plus shares. She who is enjoying 5 lakh plus followers, even boosted the hashtag by posting the tweet and made it trend at the top.

Maybe
Threat's will come to Delete this.. ,