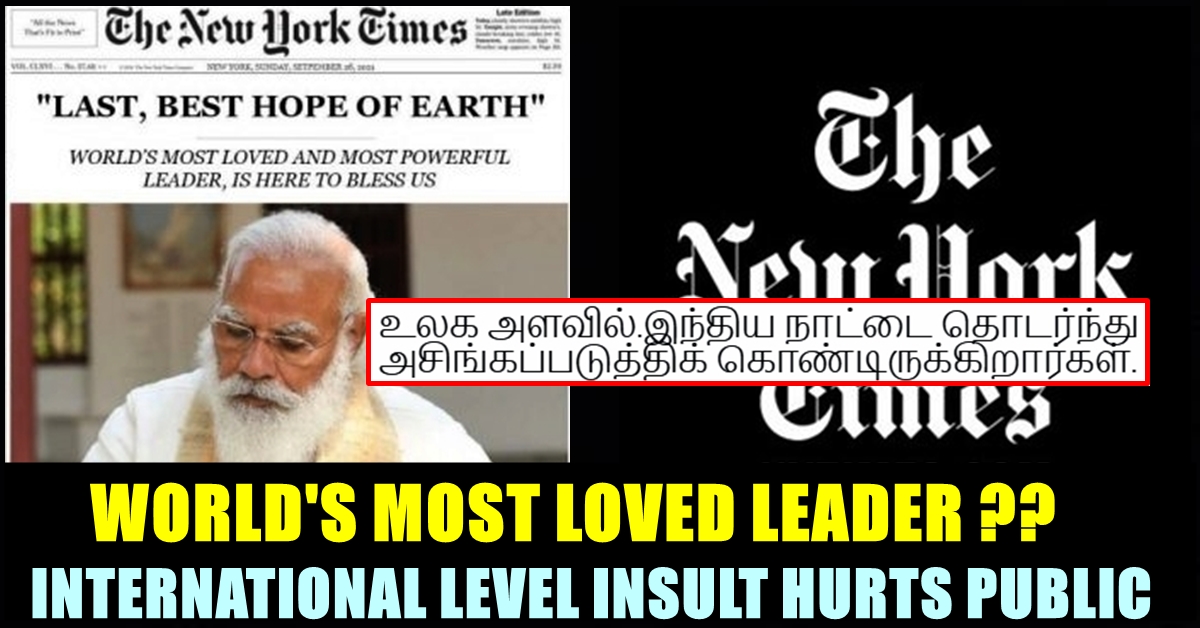 The New York Times, through its official Twitter handle, called out a viral screen shot what looks like the front page of the US daily, featuring Indian Prime minister Narendra Modi. The picture was doing rounds in prominent online mediums such as Twitter, Whatsapp, Face book and the New York Times termed it as a “completely fabricated image” in their press release. The fake screen shot shows Modi writing in a note-like book and contained a headlines saying “Last, Best Hope Of Earth, World’s Most Loved And Most Powerful Leader, Is Here To Bless Us” referring to Modi’s recent US visit.

The edition is dated 26th of September which is the next day of Modi’s US visit. The image was circulated by a number of online users with captions such as “Proud of my PM” etc. “And nothing needs to be said” a twitter user wrote as his caption while sharing the baseless image.

Rohit Chahal, national general secretary of the BJP youth wing, twitter account of whom enjoys 76,000 plus followers, shared the screen shot that was shared by one of the online users.

A user who forwarded the same in a Whatsapp group, said “Modi ji on the front page of United States’ biggest news paper. What could be a greater matter of pride than this ?” while sharing it.

However, the truth is, The New York Times didn’t feature any story about Prime minister Narendra Modi on 26th of September. A closer look at the picture could help us find the spelling error on “September” as it was typed “Setpember” and the stylesheet doesn’t match with the New York Times as well. Though one could clearly say that it is the morphed one, many supporters of Narendra Modi has been sharing it to others which seemingly garnered the attention of the authorities of The New York Times.

Brushing of the circulation of the fake image, New York Times, in their official press release, said “This is a completely fabricated image, one of many in circulation featuring Prime Minister Modi. Resharing or circulating photoshopped images online only adds to misinformation and uncertainty, at a
time when truthful, trusted journalism is needed most” said and shared a link for the readers to know about their original stories about PM Modi.

This is a completely fabricated image, one of many in circulation featuring Prime Minister Modi. All of our factual reporting on Narendra Modi can be found at:https://t.co/ShYn4qW4nT pic.twitter.com/gsY7AlNFna

Many other online users who witnessed the post from New York Times, felt that it is a global level humiliation for India whereas few claimed that it is just a joke and New York Times is unwantedly fact checking it. However, the screen shot was widely shared by many in Whatsapp family groups, thinking that the report is true.

What an embarassment !! The New York Times had to issue a clarification that a full page image and headline glorifying Narendra Modi on their front page ,shared by many BJP leaders is fabricated. If nothing, the photo shop skills of our politicians is making international news https://t.co/qBUMh61HQq

Bhakts won't feel embarrassed for such small things. Because most of them believe the nail gas engineering theory of the PM https://t.co/W05rOee9Xa

Blue Satta Maaran Opened Up About The Struggles He Faced During The Censor Process !!
Indraja Shared About Her Massive Transformation After “Survivor” Show !! Check Reactions