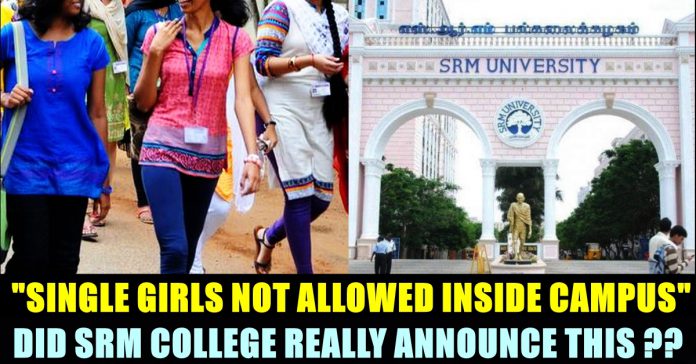 After a fake circular on SRM college demanding girls to have boyfriend mandatorily went viral in social media platforms, the college management has approached Police on Wednesday and registered a complaint with the Chengalpattu, Kancheepuram and Chennai Police. Reacting to the serious issue, the college management has reportedly threatened the students to expel them from the college if they found any of them involving themselves in such notorious act.

The Fake circular says that the eligibility of every girl student of SRM college is to have a boyfriend for security purpose. It also says that the girls who are “single” will not be allowed into the college premises. Further, the circular demands the girls to show a recent picture with their boyfriend while entering into the campus.

“It is mandatory for each and every female student of SRMIST KTR Campus to have a boyfriend inside the university premises .This has been done for the security purposes. Those girls who are single will not be allowed to enter into premises. They will have to show a recent picture with their boyfriend while entering into the campus.” reads the mindless circular which also suggests the students to “Spread Love” at the end.

Though the letter lacks clarity and authenticity, it went viral in the social media platforms, especially among the users of Whatsapp. “This is to bring to your kind attention that there are a couple of fake and inappropriate circulars being sent under the name and designation of SRMIST’s administration/ Registrar. These circulars contain false information and spoil the image of our institute. Henceforth any person-student attempting to send such unauthorized letters will be dealt with firmly and expelled from the institution. A Police complaint will also be filed against them” the SRM institution sent a notice.

The fake circular which has the signature of the registrar N Sethuraman and others including the Chancellor, President etc is dated 22nd of January. Registrar Sethuraman, while talking to Hindu, said that the college management has been sending circulars from time to time regarding the regulations during COVID 19 and the rules regarding the reopening of the college.

Previous articleHow Much Amazon Paid To Stream “Master” After Just 15 Days Of Its Release ?? Check Out
Next articleThis Tamil Filmmaker Wants “Oscar” For His Film !!