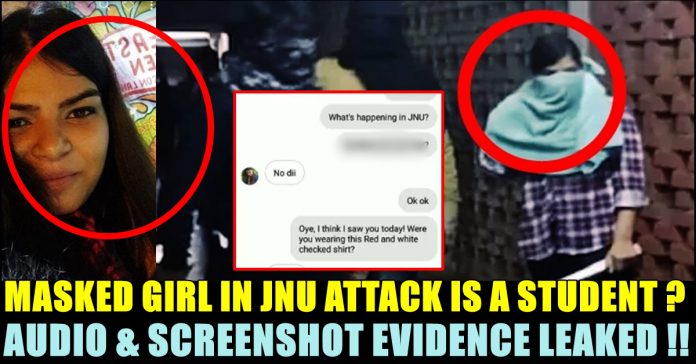 Girl Wearing Mask In JNU Attack Is A Student ??

The attack in Jawaharlal Nehru University by masked goons created massive outrage in the country. Masked goons entered the Jawaharlal Nehru University attacked students and teachers on Sunday night. The culprits armed with sledgehammers and sticks and it has been reported that they damaged the university property. The wave of protests began on Sunday night, soon after videos and photos of the attack began circulating on social media and being shown on television. Apart from demonstrations in front of the old police headquarters in Delhi, protestors gathered at the Gateway of India in Mumbai, Pune, Thiruvananthapuram and elsewhere.

Has Delhi Police arrested even one person from this mob?

As soon as the videos and pictures of the attack surfaced, celebrities across the world started reacting against it. The attack was made by the goons who are associated with ABVP’s Sangh Parivar’s student wing. The ABVP also attacked journalists in order to stop them from covering the issue.

Meanwhile several pictures of a particular girl wearing mask and carrying sticks did rounds in social media. Now she has been identified as Komal Sharma, a student from ABVP’s Delhi university. As soon as the identification was found, the social media accounts of Komal Sharma has been deleted.

Several online users started sharing her pictures to prove that she was present at the attack.

The girl who is found on multiple videos vandalising JNU Girls Hostel is Komal Sharma. She is from Delhi University ABVP unit.

One of a facebook user, Apoorva Thakur also confirmed that she was involved in the attack along with the goons. In his facebook post, he said that she is a junior to his sister. “Listen to her admission as she herself told my sister that she was there doing/causing the mayhem because my sister recognised her.” he said in his fb post by adding screenshots and screen recordings.

This news shook the entire social media who are sharing the news with various kind of reactions !! Comment your views on this !!

Actor Vimal's speech about his failures in the launch of his upcoming web series "Vilangu" has won the hearts of online users. The actor...

On the 30th day of Bigg Boss season 4, a female contestant's husband uploaded an emotional social media post saying that he never missed...