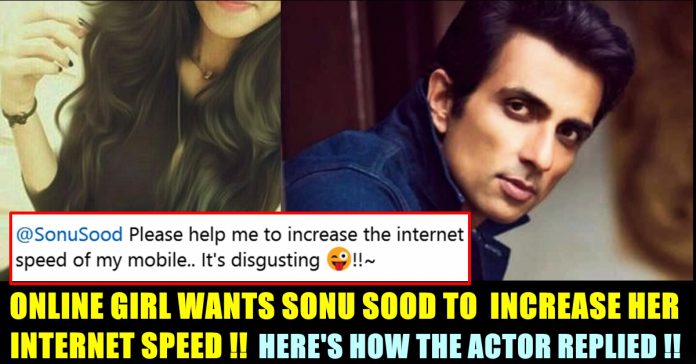 Sonu Sood who said that he would rather spend money on buying books for a student who expressed his wish of having a Playstation with the actor’s financial help, now replied to a girl who wanted him fix her Internet speed. Sonu Sood has been pretty much active in social media platforms since the lockdown implementation in country India. He has been helping people who have genuine requirement of certain things such as Tractor, books, cow, cell phone, job etc.

Now, a Twitter using woman named as Manju Sharma, tagged Sonu Sood and asked him to help her in increasing her mobile Internet speed. Unlike her fellow social media users, who slammed her for making a request, in a way of insulting the service being provided by the selfless actor, Sonu kept his nerves and posted a kind reply to her. The actor asked her to wait a bit long as he have other important things to do through his reply tweet.

It all started when he stretched his supportive hand to migrant labourers who struggled to reach their home due to the abrupt lockdown announcement by Prime minister Narendra Modi. Followed by it, the star started helping whomsoever approaching through the micro blogging social media site seeking financial help. No doubt that is being lauded by the entire country for his service to poor, helpless people amidst lockdown crisis.

The woman, in her tweet wrote, “Please help me to increase the internet speed of my mobile.. It’s disgusting” in her tweet.

@SonuSood Please help me to increase the internet speed of my mobile.. It's disgusting 😜!!~

Check out some of the replies she received :

Very shameless. Please feel the situation once. For example you're at a very long distance and there's no communication to return. You have not any job and no money to eat. @SonuSood sir collecting his own time with some others time as his own 24 hours not sufficient….

No loss to the nation by using ur mobile. plz understand in this crisis single message also v valuable. if you don't then better stop using your mobile. 1st check ur Brain 🧠 condition, I think it was damage fr dat u ask 2 @SonuSood @vishallamba20 he ll

Don't try to be funny when comes to helping others. Let him serve. Stand away and say congrats to him to motivate him. Else help others. Be responsible.

However, Sonu Sood who is known among Tamil audience for appearing in “Osthi”, “Chandramukhi”, asked her to wait till the morning of the next day as he is busy with getting someone’s computer repaired, someone’s marriage fixed, getting someone’s train ticket confirmed and someone’s house’s water problem.

Sonu, earlier helped an engineering graduate who was forced to sell vegetables to meet the ends to get her job. He also helped a man who sold his cow to buy smartphone for his children’s online class to get his cow back. Lately, the “Osthi” actor also sent tractor to a struggling family.

Check out the reply he made when a student asked him for a PS4 :

Comment your views on these kind of replies from the actor !!

Amit Bhargav is a TV actor who rose to fame through Vijay Tv serial Kalyanam Mudhal Kaadhal Varai in which he paired opposite to...