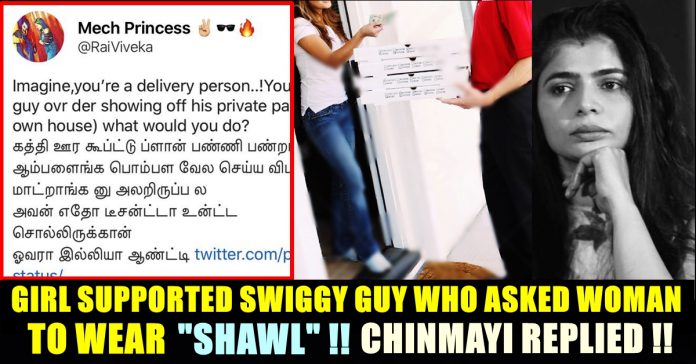 Couple of days ago, a woman in twitter complained about a swiggy delivery guy for asking her to wear shawl while receiving the order. The guy reportedly walked away as soon as he told it to the woman which made her to complain about it in Twitter by tagging the official twitter account of Swiggy. After seeing the complaint, Swiggy responded to the complainer by saying that the appropriate action will be taken soon. They also confirmed her order number to initiate the investigation. Swiggy Boy’s Atrocious Behaviour To Woman Who Ordered Food !!

Now another girl from Twitter defended the delivery guy who asked woman to wear shawl. The girl asked the complainer what would she do if she happens to face such guy in his house while receiving his food. “You would shout to alert the people nearby and would accuse the guy for not letting women to work. Won’t you ??” the girl asked.

This tweet from the girl grabbed the attention of singer and dubbing artist Chinmayi who is the representative of MeToo movement is South India. The singer replied to this tweet by saying that it is still a crime if a woman sees a man’s private part while delivering his food.

In her tweet Chinmayi wrote “A delivery person seeing a man “showing off his private part in his own house” is still a crime. The pathetic problem is how this man justifies a swiggy delivery man advising a woman to wear a Dupatta is ‘decent’ and asks the ‘aunty’ to be grateful he was decent.”

A delivery person seeing a man “showing off his private part in his own house” is still a crime.

The pathetic problem is how this man justifies a swiggy delivery man advising a woman to wear a Dupatta is ‘decent’ and asks the ‘aunty’ to be grateful he was decent. pic.twitter.com/mln6ZG2JKP

Followed by that she replied to many online users who defended the delivery guy. Check out some of replies below :

Grow up. We dont have to wear Dupattas. We wear brasseries and random men advising us on our clothes is unnecessary. Please speak to a counsellor and get over your obsession with breasts. Doesn’t look you got weaned properly

Aaah nah. It’s sad some of you cant think beyond your penis 🤷🏻‍♀️

The kinda responses for the tweet on a woman wearing a shawl – if you understand/ read Tamizh, should give you an idea of how things are around here.
Some believe a woman not wearing a Dupatta = nudity and invitation to rape.
Of course Twitter doesnt find this tweet abusive 🙂 pic.twitter.com/CU0tsjEwz4

Chinmayi is known for voicing out for the girls who became victim of sexual harassment. As soon as she represented the #MeToo movement in South India by accusing lyricist Vairamuthu, she started receiving so many personal messages from girls who got affected by harassers. The singer volunteers herself to defend the girls who are being harassed in online as well.

What do you think on these replies from Chinmayi !! Comment your views below !!

Previous articleReporter Forced This Actress To Talk In Hindi !! Watch How She Replied !!
Next article“Sanjay Manjrekar Must Ask Apologize To Harsha Bhogle” Internet Demands !!

A  viral video that shows an auto driver confronting a young couple who were traveling in their bike in a dangerous way is going...

Based on an information provided by a woman, An Indigo Mangalore-Mumbai flight number 6 E- 5237 which was scheduled to depart on 14th of...