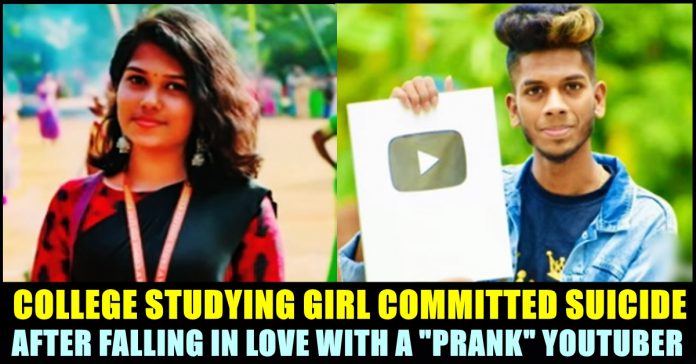 A second year visual communication student named Dhana Rakshana committed suicide after falling in love with a popular youtuber who identifies himself as “Prank Boss”. He enjoys 6 lakh plus subscribers for his YouTube channel after uploading videos based on ” Pranking” his own mother. A complaint has been registered against the Mother and son duo by the parents of the deceased.

Dhana Rakshana was studying visual communication second year in Holy Cross college that is located in Theppakulam, Trichy. It is reported that she was interested in cinematography and wanted to become a cinematographer in the future. Dhana Rakshana came to know about the Prankster while researching on how cameras are being handled in “Prank” shows, according to reports.

“Prank Boss” who is originally known as “Suriya”, got introduced to Dhana Rakshana while she was surfing through his ” Prank” videos for research purpose. It has been reported that Suriya made Dhana Rakshana to fall in love with him in the pretext of teaching her about “Cinematography”. The duo we’re chatting with each other, using the online platforms.

According to a report of Polimer news channel, Suriya was involved in a relationship, not only with Dhana Rakshana but also with a number of other girls. When Rakshana met Suriya on 5th of September, she reportedly asked him about his relationship with other girls. However, the latter sent her back without responding to her properly.

After returning home, Rakshana tried to contact Suriya but failed in it as he completely stopped responding to her. Upset over it, Rakshana hurt herself with a sharp object and also hung herself. After recovering the body, Police officers of Navalpattu started their investigation.

In the meantime, Dhana Rakshana’s parents made a complaint against Suriya and his mother, alleging that they hurt their daughter physically which made her to take the decision of killing herself. Police officials are searching for Suriya to investigate him.

Previous article“They Refused To Give Rs. 3 Lakh To Me As Salary After My First Film” – Vijay Sethupathi Opened
Next article“No Suicide Note Was Found” – “CBI CONFIRM SSR MURDER” Trending !!