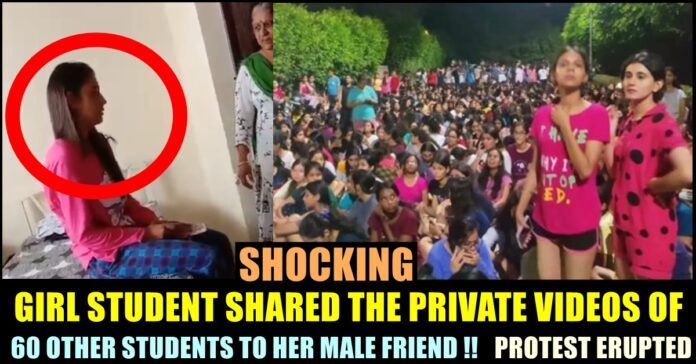 In a shocking report that surfaced in media portals, girl students from a private university located in Mohali, Punjab staged a protest after private videos of them got uploaded in internet. The protest took place citing the negligence of the college management about the matter and Police officials entered the university premises to control the students. It has been reported that the one who shot the private videos was one of the girl students and the videos were sent to her male friend who uploaded them in the po*n sites.

The protest was staged at the University on Saturday night. According to the reports that surfaced as of now, the accused girl was making videos of her fellow students taking bath and has been sending them to a youth living in Shimla. She reportedly received money for sharing the private videos of her fellow students. The victims left speechless after seeing their own videos in the internet, says reports.

As a result, eight of the students tried committing suicide and were admitted in different hospitals for treatment. The students created a ruckus alleging that the management of the university was trying to suppress the matter. They alleged that no action was taken against the accused despite complaining.

They started chanting slogans against the university on Saturday night while staging the protest. Reports suggests that the accused student is being kept in a locked room by the university management. As the commotion escalated, the management had no other choice other then calling the police.

Police officials who arrived at the spot, used force to disperse them. The girl students alleged that the university asked them not to talk about it to anyone after they raised a complaint. Videos of 60 girls students were shot and uploaded in adult websites, according to reports. Hashtag “Justice For CU Girls” is trending in the micro blogging social media site with public supporting the students to get justice.

Here’s some of the tweets that surfaced under the hashtag :

In Chandigarh University, multiple MMS of girls were leaked by a girl in exchange for money. As the videos are getting viral, the victims are attempting suicide. Reportedly 1 girl is dead and others are admitted in serious condition.#ChandigarhUniversity pic.twitter.com/qq8GpxxUwi

The protest on behalf of the girls in #ChandigarhUniversity started when one girl secretly recorded videos of other girls from hostel bathroom & leaked them online.

According to the students the University administration is trying to suppress the protest!#JusticeForCUGirls pic.twitter.com/yQieEtIKA1

Addressing the issue, Punjab’s Educational Minister requested the students to remain calm and assured action against the culprit. “I humbly request all the students of Chandigarh University to remain calm, no one guilty will be spared. It’s a very sensitive matter and relates to the dignity of our sisters and daughters. We al, including media, should be very very cautious, it is also a test of ours now as a society” Punjab Educational minister Harjot Singh Bains tweeted.

I humbly request all the students of Chandigarh University to remain calm, no one guilty will be spared.

It’s a very sensitive matter & relates to dignity of our sisters & daughters.

We all including media should be very very cautious,it is also test of ours now as a society.