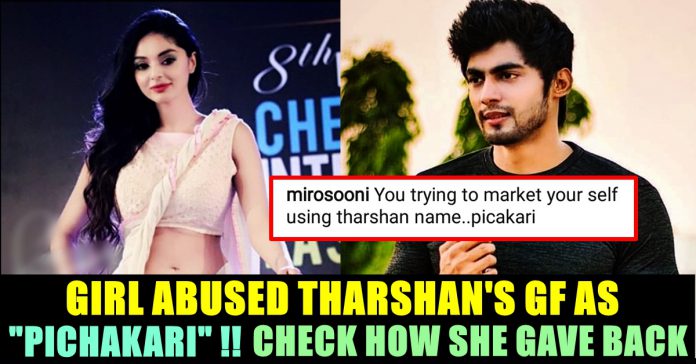 Tharshan, the most promising contestant of Bigg Boss house, likely to win the title of Kamal Haasan hosting show. The Srilanka based model impressing the audience from day 1. He got more attention when he bravely confronted Vanitha Vijayakumar, one of the experienced and dominant contestant inside the house.

Tharshan has became a heartthrob among young girls for his charming looks and he attracted family audience for his brave behaviour inside the Bigg Boss house as well. He also grabbed attention for being so similar to Atharvaa.

He revealed once that he has a crush on Sanam Shetty, a model and actress. Her support for Tharshan received well by her online followers which is evident through her Instagram posts. But the actress now stopped posting about him due to some vicious followers who accused her by saying that the problems that are taking place for Tharshan inside house are only because of Sanam Shetty.

Now, in her recent Instagram post, she welcomed everyone for the Dada Saheb Phalke Awards South. To that post one of her female follower, slammed her by accusing that she is seeking publicity using Tharshan’s name. The comment was nowhere related to the post and the Instagram user even abused her by calling her as “Pichakari”

To the comment, sanam replied by writing “actually no im not. This is an International awards event..google it..has no connection to wat ur saying..So ur obviously wrong..pichakari..u cant get ur facts rite atleast get ur spelling rite👍” sanam immediately replied. Followed by that she also wrote “begging for my attention on my wall..who is the pichakari?? U fake idiot..”

Check out the screenshot of their conversation :

The user who didn’t keep calm, again slammed sanam and asked sanam to leave him with Sherin. “Can you pls leave tharshan with sherin.. you not deserve him such an irritating crying face.” she wrote.

Check how Sanam replied to it :

For the uninitiated, Sanam Shetty is an Indian film actress, Super model and beauty pageant titleholder who works predominantly in Tamil films. Sanam shetty is a qualified software engineer from London, UK before she stepped into the film industry.

Check out some of her earlier posts about Tharshan :

What do you think on the way Sanam handled her haters ?? Comment your views below !!

Previous articlePower Cut In Dhoni’s House For No Reason ?? SHOCKING STATEMENT From His Wife !!
Next articleJUST IN : Simbu To Launch His Political Party After Reaching India ?? SHOCKING UPDATE !!

Nadigar Sangam, The South Indian Artists Association is all set for its poll which is expected to be conducted in 9 days. Two teams...

Famous Kollywood Celebrity Got Thrashed For His Speech About “Periyar” Statue!!

For instigating public to break the statue of reformer Periyar which is placed opposite to a temple, stunt choreographer Kanal Kannan who predominantly works...

JUST IN : Dhanush & Aishwarya To Reunite ??

Reports about Dhanush and Aishwarya reuniting 9 months after announcing their divorce are doing rounds in social media platforms. According to News 18, both...