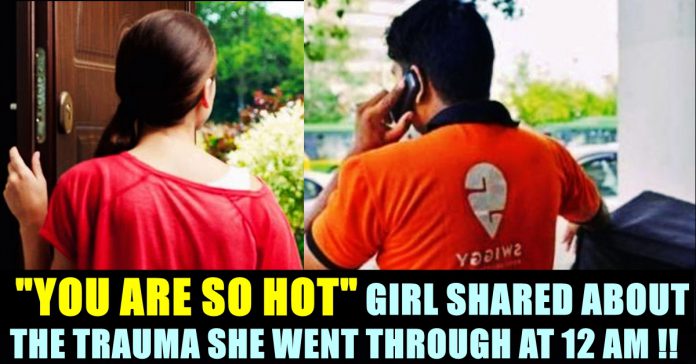 A twitter user named Rachna shared about the horrific experience she went through after ordering food in Swiggy mobile application which is meant for ordering food through online. The 21 year old girl who registered a complaint against the delivery executive who delivered the food to her, wants him to punished for the way he behaved towards her on the day he delivered the food to her.

She who ordered food through the app during 11 PM on Tuesday, received her food at 12, according to her tweet. The delivery executive who delivered the food to her, stared her for a long time. When she asked for the change to him, the man said “no” and continued staring at her which made Rachna to make him keep the change and slam the door.

After 5 minutes, the man who didn’t leave, started ringing the door bell again and forced her to open the door again. He asked her where the nearest petrol bunk is while staring at her without blinking his eyes and repeated her exact same words after getting a response from her. He also said “you are so hot” and tried to say something else which made Rachna to close the door again, this time aggressively.

After getting such response from her, the man was standing there for 20 long minutes without leaving, according to the tweet posted by the youngster. The man could have captured pictures or video of her in the second time, Rachana believes and expressed her frustration over it through tweets.

“i don’t feel safe at all in my own apartment. i feel anxious ALL THE TIME. i hear an unfamiliar noise from outside the door, my heart rate increases. i couldn’t sleep almost the entire night that night and had to inform my guy that i’ll be calling him in case of emergency.” she wrote in her next tweet and shared about the response she received from swiggy.

Rachna said that she will be updating her tweet thread whatever happens regarding the complaint she made to swiggy and believed that a Kruthika from the food delivery app would take appropriate actions against him. “i wasn’t going to address this publicly if you’d taken the “right actions” against him @swiggy_in but it’s lovely to see that you’re having a gala on twitter with your display name bullshit.” read one of the tweets of Rachna and she concluded the thread by writing “i’m not letting this go though. i’m going to update this thread with whatever is done and also if nothing is done.”

upon asking for the change he was supposed to give me he simply said no words at all and kept staring at me and so i obviously got a little creeped out and said he could keep the change and shut the door. since he seemed so suspicious i quickly looked through the peephole and –

he then again kept staring at me (didn’t blink once) and asked me where the nearest petrol bunk is. now, i know for a fact that he knew where it was since he literally had to pass it to get to my place from the restaurant (as shown on the map on swiggy)

here’s the thing: every time anyone walks up the stairs of my apartment i can very clearly hear the door they walk through downstairs and this man took over 20 minutes to open that door after he’d left, which means he was probably waiting in the hallway or something, jesus.

i don’t feel safe at all in my own apartment. i feel anxious ALL THE TIME. i hear an unfamiliar noise from outside the door, my heart rate increases. i couldn’t sleep almost the entire night that night and had to inform my guy that i’ll be calling him in case of emergency.

there has been no update of this whatsoever and i don’t think i’ll be getting one either. the asshole that thought it was okay to do that is neither going to realise what he’s done/is doing is wrong nor will he face the “right actions” taken against him by the app.

so i was contacted by someone named Kruthika from swiggy who sounded quite promising. i’m hoping they do the needful and the crapbag gets what he deserves for thinking this was okay.

i’m not letting this go though. i’m going to update this thread with whatever is done and also if nothing is done.

“Hi there, we are appalled to hear of this incident that you’d faced last night. We assure you that we do not take such incidents lightly. Please share the order details. We will escalate this right away.” read the reply from Swiggy cares.

i’ve sent it to your Dm.

As soon as the tweet thread from the victim surfaced, many started reacting to it in a way of slamming the unknown delivery guy. Many hoped for the safety of the girl and requested swiggy to take immediate action against the culprit.