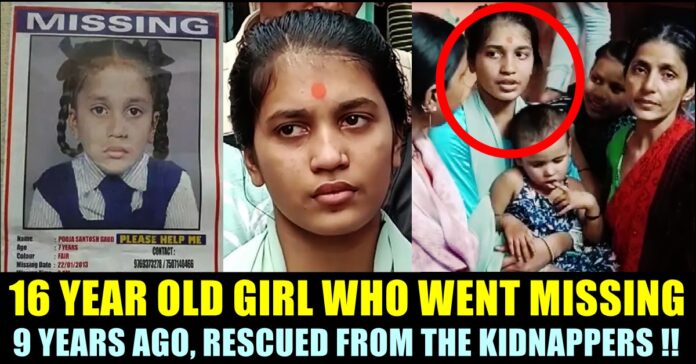 On Saturday, A 16 year old girl reunited with her family 9 years after getting kidnapped. She went missing near her house while she was just 7 years old. Mumbai Police traced and made her reunite with her family members. The accused has been identified as Harry D’Souza who allegedly kidnapped the kid as he had no child. He is accused of physically torturing the girl by sending her to work after giving birth to a baby with his wife.

A 7-year old child Pooja went missing from a Mumbai slum. 9 years later, a housemaid who had a smartphone found about her from Google and reunited Pooja who is now 16-years old with her parents. pic.twitter.com/69e4qKwhq7

The victim named Pooja used to live with her parents in Andheri. She went missing on 23rd of January, 2013 after leaving her school to reach home. When she did not return for along time, the parents filed a missing case in the station that is located in the DN nagar.

The 16 year old girl told the police that D’Souza and his wife Soni used to beat her and made her work as a domestic help at a place. Police officials found the girl with the help of an alert woman domestic help.

What a story. See the deep sorrow in Pooja’s mother’s eyes! Hero of this saga ? Recently retired ASI, the diligent cop , Rajendra Bhosale, who traced over a 100 missing girls during his tenure. He should be rewarded , suitably recognised
⁦@MumbaiPolice⁩ ⁦@mid_day⁩ pic.twitter.com/e3kGDVvabG

“Pooja once told the woman that she was being harassed by her family members, who had kidnapped her years ago. The woman then searched on the internet to see if there was any news report about her missing. During the search, she came across the articles about Pooja after which she informed the Police” a police officer said.

After making inquiries with the girl, Police confirmed that she was the one who went missing 9 years ago. DN nagar Police registered various case against the couple who had kidnapped the girl. Recollecting about the day she got kidnapped, Pooja said to media “I was lured by D’Souza on the pretext of getting an ice cream. While he did buy me an ice-cream, he took me to Haji Malang in Kalyan. I kept crying, so he threatened to throw me off the hill. Initially they were good to me, but after they had a daughter in 2015, they would beat me up with a belt, rolling pin etc,” the now-teen girl said.

From the article – Between 2008 & 2015, 166 girls went missing in the area under Dadabhai Naoroji police station. Bhosale and his team tracked 165 of them down. Pooja is the missing piece of this jigsaw. Finally they found girl no. 166 after years. https://t.co/jqCrT1TEam pic.twitter.com/WRh4NxVDih

Previous article“Don’t Impose Hindi Language On Us” – Gayathri Raguramm To Udhayanithi Stalin !!
Next articleFirst Glimpse Of Nayan-Wikki’s Netflix Show In Out !! WATCH

Cristiano Ronaldo, the Portuguese footballer does everything in style and his fans keep an eye on whatever he does. The manner in which Ronaldo...