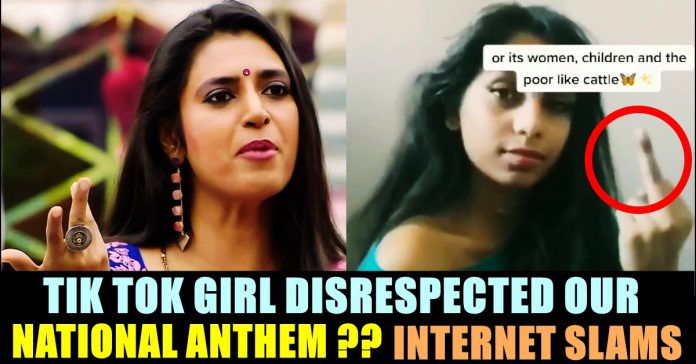 A video of a young girl performing Tik Tok video with India’s national anthem running in the background is going viral in the social media platforms. Not sure whether the song was added by herself or by others but she is facing severe hatred from the users of the micro blogging social media site for disrespecting India’s national anthem as it can be heard running in the background of her video. Actress Kasthuri who is known for stating her opinions in Twitter, has said that a criminal case can be lodged against her under article 51a.

National Anthem of India, written by Rabindranath Tagore is being treated with utter most respect in our country. Respecting national anthem is considered as one of the main attributes of patriotism. In this particular video which is doing rounds in Internet, the girl can be seen showing middle finger to things which disappointed her so far about the Indian country. She shows middle finger when “Respect is earned” pops out in her video and goes on to show the same to “I will never respect a nation that treats their minorities like trash or its women, children and the poor like cattle.” And then “Mod’s maniac and the BJPee is cancer” pops out in her video and the tik toker shows middle fingers from her both hands. “If you can’t understand why I’m mad, you are a privileged Hindu” popped out next which she pointed with her middle finger. “Free speech is a thing, go cry” she said through her video.

She is Hannah Abraham. Indian citizen living in Canada.
How can she insult our National Anthem like this, I as a responsible citizen of India demanding strict action against her and punishment for this offense.@HMOIndia @narendramodi @AmitShah pic.twitter.com/87Z73AM8m9

Users of social media are suggesting that the youngster is an Indian who living in Canada. Actress Kasthuri said that what the girl did in her video is above Modi or BJP or any others. “Legally speaking, This person has violated article 51a of the Indian constitution & is liable for imprisonment. A suo moto criminal case may be lodged against the perpetrator and look out notice issued to all ports of entry. National anthem is above Modi or BJP or any others” read the tweet of actress and Bigg Boss participant Kasthuri whose bio says that she is a Patriot.

Legally speaking, This person has violated article 51a of the Indian constitution & is liable for imprisonment. A suo moto criminal case may be lodged against the perpetrator and look out notice issued to all ports of entry. National anthem is above Modi or BJP or any others. https://t.co/isY3RsrX6k

Many others expressed similar opinions in Twitter about the video. Other videos of the Tik Toker also started surfacing in other social media platforms.

Here is a video of an ungrateful Indian girl named Hannah Abraham denigrating the Indian National Anthem.
She lives currently in Canada on a student visa.@MEAIndia Sir, please take action. This is not pardonable. pic.twitter.com/q7HDGnOvxg

I shall expect you to take actions like you did in case of Ravi Hooda. pic.twitter.com/tcT1pVmA9W

According to reports, Section 3 of the act provides that people who intentionally prevents the singing of the Jana Gana Mana or causes disturbances to any assembly engaged in such singing shall be punished with imprisonment for a term, which may extend to three years, or with fine, or with both.

A report on a English lecturer named Chandhini resigning her job after being asked to remove her hijab is making headlines across the country...

In this recent promo of Tamil Bigg Boss, Kavin's friend Pradeep Antody entered the house on behalf of his family. In the promo he...