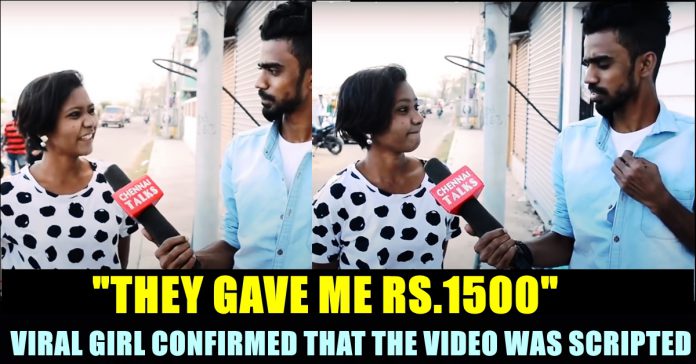 Since the arrest of the makers of “Chennai talks” youtube channel, several reactions regarding the viral public opinion video surfaced in social media platforms. Now, the girl who appeared in the video and also made the complaint to the police, has confirmed that the answers she gave during the public opinion video were scripted. While interacting with Behindwoods youtube channel, she also revealed that she received Rs.1500 for her part and said that she made the complaint after going through a mental trauma after appearing in the video of “Chennai Talks”.

Three members of a Tamil youtube channel “Chennai talks” arrested for uploading a video of profanity content. Days ago, a video showing young women being asked on how well their 2020 went did rounds in social media platforms. It has been reported that the girl who appeared in the video has registered a Police complaint, accusing the makers of conversing vulgar content with her before spreading the video to make it viral.

Police men of Sashthri Nagar registered a case based on the complaint made by the individual and started their investigation. For making an obscene conversation with a woman and uploading it in their youtube channel, host of Chennai Talks named Asen Badshah (23), Camera man of the same channel named Ajay Babu (24) and the Channel’s proprietor Dinesh Kumar got arrested.

Now, appearing for an interaction with Behindwoods youtube channel, she had shared about how Chennai Talks approached her and made her perform in the video. She said that anchor Asen promised her to turn the comment section off while uploading the video but failed to do it. “Even after I asked him turn the comment sections off, he said that his channel head denied to do it. That left me depressed and I even had suicidal thoughts” she said.

She further said that she received the money to spend it on 33 children she is raising. Report of Puthiya Thalaimurai has said that the makers of the channel organised such talk show and made videos with people who are known to them. When public warned them not to make such videos, the makers, reportedly involved in argument with them and even made death threat to the public, said the report of Puthiya Thalaimurai. Cases has been filed against the trio under relevant sections of Indian Penal code. The Saidapet court has remanded the accused to 15 days of judicial custody and they are currently lodged in Chengalpet prison.

Previous articleHow Is “Master” ?? Check Out The Review & Reactions
Next articleSamyuktha Exposed Voting Stats To Bala !! Fans Got Extremely Upset

India became the third most affected country in the world, as far as the COVID 19 virus is concerned. Overtaking Russia on Sunday, India...