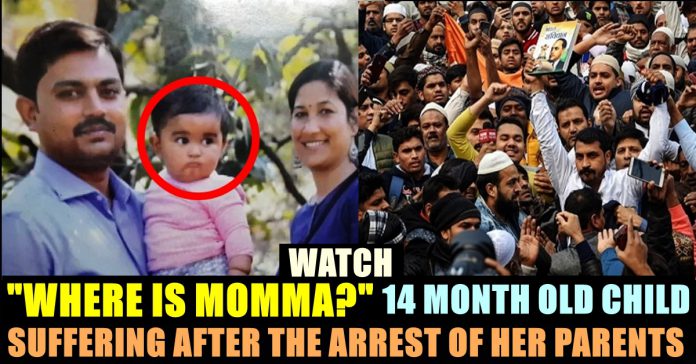 Girl Child Suffers After The Arrest Of Her Parents !! WATCH !!

Due to the protest against the Citizenship Amendment Law, over 70 people got arrested in Uttar Pradesh’s Varanasi. They got arrested for protesting after the ban on large gatherings of people. Among the money, Ekta and Ravi Shekar, a well known activists also got arrested. Reportedly they are running an NGO named as Climate Agenda which creates awareness on air pollution.

Now it has been reported that their child, Ayra, a 14 month old baby is suffering without her parents for past one week. Police arrested her activist parents on December 19 which is on Thursday last week. Now she was being taking care of her relatives. Relatives and well wishers of the activist couple are trying hard to get bail for them and to fight the case legally in court.

“She is not eating. Somehow we manage to feed her a few spoons of food . She says, ‘Amma aao, Papa aao (Mother come, Father come)’ all the time. We keep telling her they will come. We don’t know what to do,” the baby’s grandmother added.

“When she watches picture of her parents in mobile, she looks at us as if she were asking where Mamma is,” said elder brother of Ravi Shekar.

According to NDTV, The Varanasi police who are justifying their arrest said that the unlawful assembly of people instigated tension in town. It is worth remembering that a 8 year old child died in a stampede triggered by police baton charging on protesters.

Over 21 people have died while protesting against the law whereas many are suffering with bullet injuries. The Citizenship (Amendment) Bill 2019, that seeks to give Indian nationality to non-Muslim refugees from Pakistan, Bangladesh and Afghanistan passed the lower House test recently. The Bill seeks to amend the definition of illegal immigrant for Hindu, Sikh, Parsi, Buddhist and Christian immigrants from Pakistan, Afghanistan and Bangladesh, who have lived in India without documentation. They will be granted fast-track Indian citizenship in six years. So far, 12 years of residence has been the standard. Many are criticizing the law for being biased and discriminating muslims. It is also criticized for violating the secular principles of the constitution.

Padma Priya Proudly Announced About Her Entry In DMK Party !! Got Trolled

Former Makkal Needhi Maiam party member Padma Priya announced about her joining in the DMK party with a couple of tweets on Friday and...