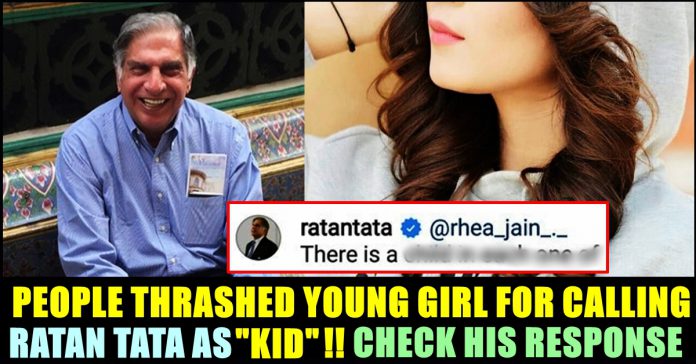 Ratan Tata, one of the popular icon in Indian business industry is the chairman emeritus of Tata Sons. The 82 year old won the hearts of Internet users with the way he defended one of his follower in Instagram. The man who is very much known for his business ethics and philanthropy, joined the photo and videos posting social media app on the October of last year.

On reaching one million followers on Tuesday, Ratan uploaded a post with a message to his followers. The said that he is very much excited to co-exist with the community of the social media app. “This wonderful online family is not what I expected when I joined Instagram and I have you to thank for it.” he wrote in the caption. This post from him grabbed nearly 5 lakh likes so far.

I’ve just seen that the number of people on this page has reached a milestone. This wonderful online family is not what I expected when I joined Instagram and I have you to thank for it. I do believe that the quality of connections you make in this age of the internet is far greater than any number. Being a part of your community and learning from you is truly exciting and makes me very happy and I hope our journey together continues.

Many of his followers expressed their happiness on Ratan receiving 1 million followers whereas one of a commenter got severely criticized for her comment under the post pf him. While congratulating him, she wrote “Chottu” (Small Kid) to refer the business man which didn’t go well with the other followers of Ratan. They started blaming her by saying that she disrespected the icon with the choice of her words though she defended herself by saying “”he is an idol for every one” and “from love I can say anything.”

Despite her clarification, many continued to blame her which resulted in the Instagram user deleting her comment. However Ratan Tata defended her in the reply section and asked others to treat her with respect. “There is a child in each of us. Please treat this young lady with respect,” he wrote, adding a smiley face at the end.

Check out the screenshot of her comment and Ratan’s reply here :

His comment was received well by the other set of followers who lauded the business man for his gesture to defend a girl. Now, few hours ago, Ratan came up with a series of Instagram stories to express his thoughts on the incident that too place yesterday.

He wrote “A very innocent young lady expressed her heartfelt sentiments yesterday and called me a ‘kid’ in one of her comments. She was bullied and disrespected for this, and in the end she deleted her sentiments. I appreciate and respect the heartfelt note that the young lady had left me, and hope she will not refrain from posting again” he wrote in his three stories.

Comment your views on the way Ratan handled this situation !!