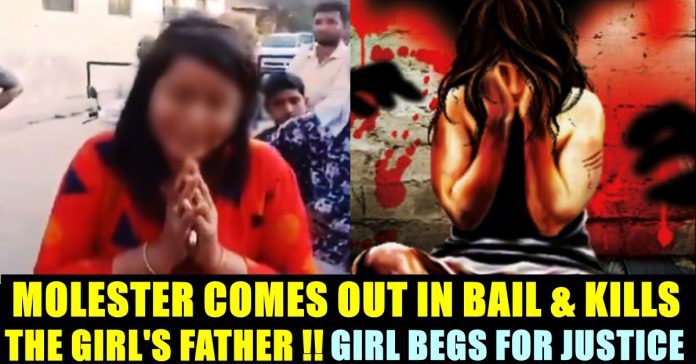 For complaining against a molester of his daughter, the accused who was granted bail by a local court, allegedly shot the father and killed him. A video of the daughter begging for justice is going viral in social media platforms. The horrific incident took place in Hathras of Uttar Pradesh and the Chief minister of Uttar Pradesh Yogi Adithyanath has directed officials to book all the four accused, including the Samajwadi Party leader Gaurav Sharma.

In the heart breaking video which surfaced in the Internet, The girl could be seen begging for justice and alleged that her father was killed by the man who harassed her earlier. She said that her father filed a complaint against Gaurav Sharma in 2018 on charges of molestation.

Police officers said that the accused and the deceased arrived at the temple and had an argument over the case. The man who got severely injured and succumbed to injuries, said reports.

When the girl reached the hospital to see her father, she found him dead and sought justice for his father amidst the people. She was in tears and couldn’t able to speak due to the grief which is evident in the video. She begged police to take immediate action against the main accused by requesting them with folded hands.

“Please, I need justice. Please give me justice. First, he committed chedkhani (molestation or eve-teasing) with me and then when my father lodged a case against him, he killed him out of annoyance,” she said in the video. “He shot my father in the temple, chest and back. Why did he have to shoot him in the chest,” she further asks and identified the main accused as Gaurav Sharma.

Where is the safest place for young girls and women in UP? 😭#Hathras_Again
pic.twitter.com/D6W4jPeyzz

Meanwhile, body of the deceased was sent to the post mortem and the Police had reported that one of the accused named Lalith Sharma got arrested. On Tuesday, Uttar Pradesh Chief Minister Yogi Adityanath directed officials to book all the four accused.

#UttarPradesh Chief Minister #YogiAdityanath directs officials to invoke the #NationalSecurityAct (#NSA) against the accused in #Hathras shoot out. Man accused of molestation, out on bail, had shot dead the father of the victim on Monday. pic.twitter.com/SYxiU0kLBC