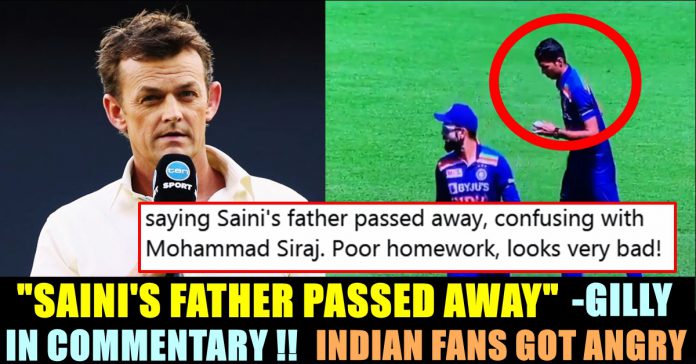 The match started with highest expectations as fans of Indian cricket team were waiting for it for a long time. They are going to witness a match with live audience after a year and the players of Team India are going to don a new jersey for the series. However, a huge disappointment occurred for the TV watching audience as soon as the match started.

The Australian commentators panel which consists former legendary Australian players such as Shane Warne, Gil christ, Brett Lee and others made a mistake saying that Mohammad Saini’s father passed away recently when he came to bowl his first over.

The one who said it was former Australian wicket keeper/batsman Gilchrist. It is very well known that Mohammed Siraj lost his father recently and decided to stay with the team despite of the mental trauma he is going through and not Navdeep saini. Siraj’s father, Mohammed Ghouse, passed away on Friday (November 20) after battling a lung ailment in Hyderabad. The BCCI gave him an option to return home, but the right-armer chose to stay with the team.

Gilly wished Saini a good luck for his decision of staying with the team during his commentary. He said that he is going through a tough time as well.

Fans who noticed the blunder made by Gilly, immediately pointed it out in twitter and tagged the former cricketer. Many of them expressed their disappointment over the experienced cricketer for making such mistake due to poor home work. “The Aussie commentators on air saying Saini’s father passed away, confusing with Mohammad Siraj. Poor homework, looks very bad!” wrote Srini mama in twitter.

Mitchell Mclenaghan, a professional cricketer for New zealand also mentioned about it in his tweet.

Only in cricket where commentators can’t remember facts.

It was Siraj’s father and not Saini…

No Australian commentators, Saini’s father did not pass away. It was Siraj. Not all RCB players look alike.

Gilchrist who realized that he had made a mistake, asked a public apology through a tweet. Replying to one of a fan, Gilchrist apologized by writing “Yes, thanks @anshu2912 I realize I was mistaken in my mention. Huge apologies for my error, to both @navdeepsaini96 and Mohammed Siraj” in his tweet.

Yes, thanks @anshu2912 I realize I was mistaken in my mention. Huge apologies for my error, to both @navdeepsaini96 and Mohammed Siraj. 🙏😌 https://t.co/618EUIEyNU