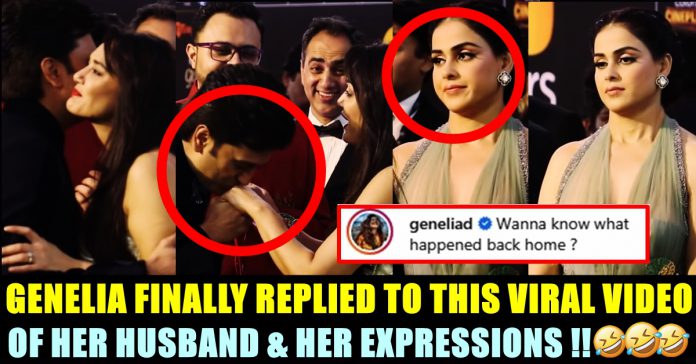 Genelia Replied To The Viral Video Of Her Husband & Preity Zinta !! Priceless

Actress Genelia who recently grabbed the attention of Tamil social media by shaking her legs for the most famous “Vaathi Coming” song, now came up with another video which could possibly make headlines. She responded to a familiar video which showed her husband Riteish Deshmukh greeting actress Preity Zinta affectionately while she was standing aside. The “Sachien” actress came up with a video enacting what happened next and left the netizens including the celebrities of Indian film industries in splits.

Genelia, after making her debut with a Bollywod film named “Tujhe Meri Kasam” rose to fame after acting in prolific filmmaker Shankar’s coming of age romantic drama “Boys”. Followed by that, many others works of the actress in Tamil, Telugu and Hindi industry got highly recognised. “Bommarilu”, “Santhosh Subramanyam”, “Sachein”, “Velayutham”, “Jaane Tu Ya Jaane Na” are some of her notable works in the film industries across India.

Genelia got married to Bollywood actor Ritesh Deshmukh on 3rd of February, 2012. She acted with his three films including her debut. Followed by several rumours and link ups regarding the relationship between the duo, the couple got married and gave birth to two children Riaan and Rahyl on 2014 and 2016 respectively.

Since her marriage, Genelia was not much active in film industry as she merely did few cameo appearances. Most recently, an old video of her husband Ritesh and Bollywood icon Preity Zinta greeting each other by hugging and kissing in a public event went viral in social media platforms. The video also showed Genelia standing near her husband and looking at the duo in a cryptic way.

The incident caused several memes, trolls and reactions based on how a wife would feel jealous if her husband flirts with other girls in front of her stormed the Internet. Watch the viral video and reactions below :

That facial expression at the end was epic😁😁😁
Watch till end. pic.twitter.com/K0z7L6yUb0

Best performace by Genelia till date!😛

God knew what Genelia felt about her husband when she saw him with Preity 😂 pic.twitter.com/6BOlKAqrXe

Despite of the video’s age, Genelia, on Friday, came up with a response in her official Instagram account. After showing a glimpse of the viral video in her Instagram reel, Genelia enacted what really happened on that day after that incident. She pretended like punching her husband and Ritesh co-operated with his wife for her Insta post by pretending like a fearful husband.

Adding the video, Genelia wrote “Wanna know what happened back home ?” as her caption and uploaded it in her account through which she is enjoying 4.6 million followers. Check out her post below :

The video left her followers including many celebrities such as Tiger sheroff, Pooja etc. Check out some of their reactions below :

Chief minister Edappadi K Pazhaniswamy's strategy of making important announcements of the day of election date announcement, to attract the votes of public is...