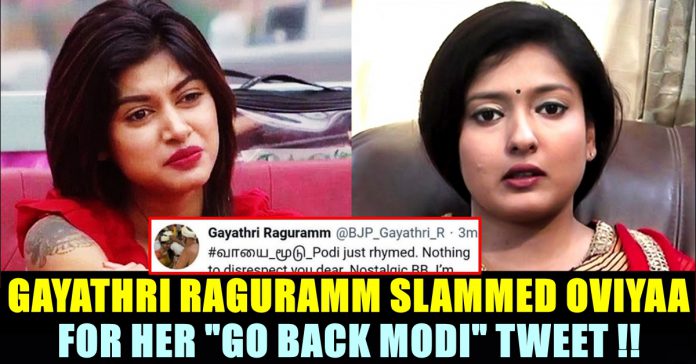 After seeing actress Oviyaa’s tweet against Prime minister Narendra Modi’s arrival into Tamil nadu, her Bigg Boss housemate and BJP member Gayathri Raguramm came up with a number of tweets slamming her. She alleged that DMK party’s MK Stalin and Udhayanithi Stalin has hired Oviyaa to hit back at BJP part and herself.

Ahead of Prime Minister Narendra Modi’s visit to Tamil nadu on February 14, hashtag “Go Back Modi” is trending in the micro blogging social media site with tweets condemning the entry of the former Gujarat Chief minister. Among the several tweets which were posted with the hashtag “Go Back Modi”, a tweet uploaded by former Bigg Boss contestant Oviyaa is also trending in the Internet with large number of reactions.

Several other important events are also going to take place in Tamil nadu and Kerala. However, users of Twitter, expressing their displeasure over the Prime minister’s arrival, has been trending the hashtag “Go back Modi” in Twitter. Among all the tweets, a tweet uploaded former Bigg Boss contestant and actress Oviyaa who was born in Kerala and working in Tamil nadu is going viral among the twitter users.

She who is known for her bold opinions and honest behaviour inside the Bigg Boss house, gained a huge fan base through the reality game show. Now, responding to the trending hashtag, Oviya uploaded a tweet saying “#GoBackModi”

Replying to her tweet, Gayathri Raguramm who participated in the first season of Bigg Boss show with Oviyaa, uploaded a screenshot of her reply and alleged that it is a diversion from party DMK. “Ok guys this is the expected diversion from DMK. As I’m hitting so hard on Udhay and Mr. Stalin. They hire Oviya. Jokers have to get help from BB contestant. Money speaks different language. #GoBackToModi #NationFirst” read the tweet of Gayathri Raguramm.

Ok guys this is the expected diversion from DMK. As I’m hitting so hard on Udhay and Mr. Stalin. They hire Oviya. Jokers have to get help from BB contestant. Money speaks different language. #GoBackToModi #NationFirst pic.twitter.com/AtOYLzTv72

Check out some of the replies Gayathri made to her followers :

BJP will not pay money. Only we spend on people with our hard earn money. It’s called service.

I could have messaged her directly that’s why. Because she is my friend 😊.

Merely she will accept. She is not the kind to hide.

The actress is also a politician who supported BJP party in the Lok Sabha election. In November 2015, Gayathri was appointed as Bharathiya Janata Party’s secretary for arts in Tamil Nadu. She had earlier joined the party in 2014 in the presence of BJP president Amit Shah. Recently, she got appointed as a president of Art & Culture Wing of BJP Tamil Nadu.

Previous articlePant Trending At Top In Twitter After Having A Face Off With Stokes !! WATCH
Next articleChief Minister Edappadi K Pazhaniswamy Launched The Seventh Phase Of Keezhadi Excavation !!