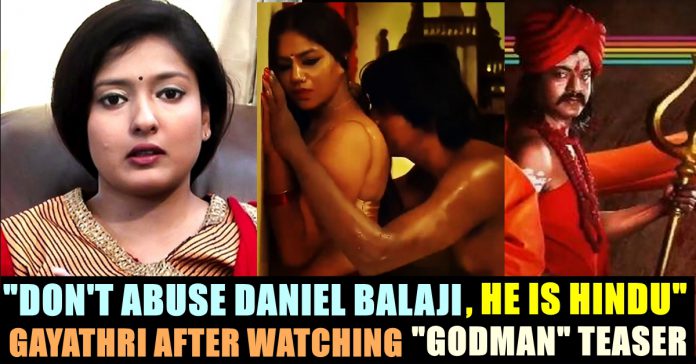 An upcoming web series named as “Godman” which is going to be streamed in Zee5 originals created huge controversy in the social media platforms as the teaser of it sparked huge outrage due to its content. The web series which features some of the biggest names of Kollywood such as Daniel Balaji, Sonia Agarwal, Mankatha “fame” Jayaprakash allegedly hurted the sentiments of Brahmin community. Hours after the teaser of the web series released, it got removed from youtube due to the protests that took place in social media platforms against the content of the series.

Daniel balaji will be making his digital debut in this “Godman” which was directed by Babu Yogeshwaran who made Jayam Ravi starrer “Daas”. He is also currently making “Tamizharasan” starring Vijay Antony. The series is expected to be released from 12th of July in Zee5 web channel.

The trailer which shows Jayapraksh as Hindu saint, contains dialogues against the Brahmin community and the people who belongs to the community. “All the Brahmin people around you are scoundrels”, “I am going to show this world how a Brahmin should live” are the dialogues which triggered Tamilnadu Brahmin association to write a letter to chief minister’s cell seeking the ban of the teaser. An hashtag demanding censor for web series also trended in Twitter. Many people who belong to Brahmin community accused the teaser of hurting their feelings. Few also expressed their disappointment over the explicit content the teaser contained saying that there are many children using phone nowadays.

As a result of this outrage, the teaser was taken down in all the social media platforms. However, protagonist of the series didn’t delete the teaser fron his official twitter account.

Reacting to this controversy, Gayathri Raguramm, supporter of BJP party posted a series of tweets explaining that Daniel Balaji doesn’t have anything to do with this. She said that he is a Hindu and picked the name “Daniel” from “Chiththi” serial. She asked people not to call him in private and not to abuse him as he is just an actor. She further suggested people to investigate director and producer of the series instead of targeting the actors.

Harassing actors or celebs by phone calls must stop. Balaji has been acting in movies mostly negative characters. also the actors were just described only their role in web series not entire script. Yes the trailer was controversial not acceptable & ZEE5 has changed the teaser.

The director and producer must be investigated. I condemn them for such a trailer cut directly targeting Brahmins. I request ZEE5 to go through the GODMAN series as OTT platform doesn’t require censor certificates please ensure there is no such things that is against our culture.

Though the teaser got deleted in youtube, it is still streaming in the app with a confirmed release date of July 12. Comment your views on this teaser and Gayathri Raguramm’s opinion regarding it !!

Nayanthara Fans Trolled Karan Johar For The Comment He Made To Samantha !!

A comment made by Bollywood director Karan Johan about actress Nayanthara in his recent show with Samantha and Akshay Kumar, has irked the fans...