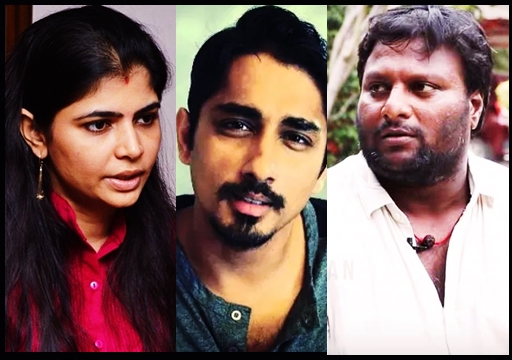 Gayathri Raguramm, Mohan G, Chinmayi & Others Confronted Siddharth For This Tweet Against Saina !!

A number of celebrities including BJP’s Gayathri Raguramm, Director Mohan G, Singer Chinmayi confronted actor Siddharth for a tweet he posted against Badminton Champion Saina Nehwal after seeing her tweet criticizing people who blocked the way of Prime minister Narendra Modi in Punjab. Four days after Siddharth sarcastically trolled Saina’s tweet, a number of celebrities called out the actor.

Tamil nadu based Pan Indian Actor Siddharth’s reply tweet to India’s Badminton Champion Saina Nehwal who claimed that Prime minister Narendra Modi got attacked while trying to visit Punjab is going viral across the social media platforms. Saina Nehwal said that no nation can claim itself to be safe if the security of its own Prime minister is compromised and condemned the “cowardly” “attack” on Prime minister Narendra Modi. Replying to her tweet, Siddharth sarcastically thanked God and termed Saina Nehwal as a “protector” of the nation and called Saina as a “Subtle cock Champion” in his tweet. He also condemned globally acclaimed pop singer Rihanna who uploaded a tweet supporting Indian farmers earlier.

The issue grabbed global attention and hashtags such as “India Stands With Channi” were trended in the micro blogging social media site. Meanwhile, India’s badminton champion Saina Nehwal, came up with a tweet in her official twitter handle, condemning the “attack” on PM Modi which was never happened. “No nation can claim itself to be safe if the security of its own PM gets compromised. I condemn, in the strongest words possible, the cowardly attack on PM Modi by anarchists. #BharatStandsWithModi #PMModi” read her tweet.

No nation can claim itself to be safe if the security of its own PM gets compromised. I condemn, in the strongest words possible, the cowardly attack on PM Modi by anarchists.#BharatStandsWithModi #PMModi

Among the many reactions that surfaced trolling the athlete for her claim about an “attack on PM Modi”, actor Siddharth’s grabbed wide attention. “Subtle cock champion of the world… Thank God we have protectors of India. Shame on you #Rihanna” he said to sarcastically troll Saina.

Subtle cock champion of the world… Thank God we have protectors of India. 🙏🏽

Shame on you #Rihanna https://t.co/FpIJjl1Gxz

Check out some of the reactions surfaced against Siddharth below :

This is really crass, Siddharth. You just contributed to what a lot of us women are fighting against.

Very brilliant stupidity.. Don’t insult a achiever like this.. https://t.co/twxKoH6Gw0

This is an actor using “Sexually abusive” slur against a International woman sports icon! 😡 pic.twitter.com/9AOQVulaH2

So @TwitterIndia provides a blue tick and normalises this crass sexual slur hurled at a national sports icon by a two-bit actor, and they talk about how they want to make Twitter a ‘safe space’ for women. This is not the first time this Siddharth Sicko has done this. pic.twitter.com/PQkliIMRQY

What kind of family grooming and professional desperation drives this guy to sexually harass a world champion sportsperson and a successful TV anchor. And say stuff like ‘Bharat Mata kijiye’.
You need psychiatric help, @Actor_Siddharth. pic.twitter.com/pARZG6rSWx

Previous articleList Of Celebrities Who Tested Positive For COVID 19 Virus Since Last Week !!
Next articleJUST IN : Suresh Raina Slammed Siddharth After Seeing His Explanation !!

Fan Made The Terrific Super Deluxe Trailer In Vadivelu Version !! You Must See How Thyagaraja Kumararaja Reacted !!

"Rettai Roja" fame Shivani Narayanan who is highly believed to enter the Bigg Boss 4 show as a contestant, has released a statement slamming...