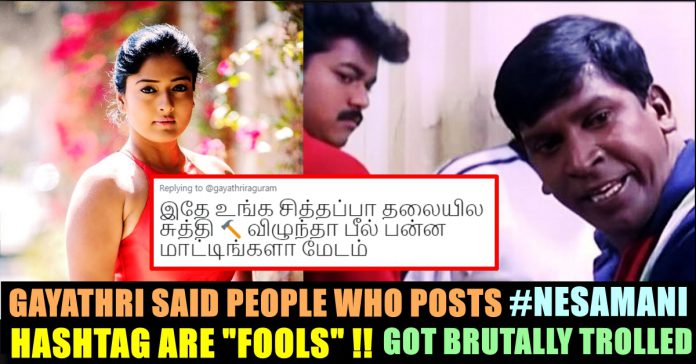 Gayathri Raguramm Criticized Those Who Are Using #PrayForNesamani Hashtag !! Getting Mercilessly Trolled !! The actress is also a politician who supported BJP party in the Lok Sabha election. In November 2015, Gayathri was appointed as Bharathiya Janata Party’s secretary for arts in Tamil Nadu. She had earlier joined the party in 2014 in the presence of BJP president Amit Shah. In 2017, Gayathri was a contestant on the Tamil reality show Bigg Boss hosted by Kamal Haasan.

Gayathri is also  known for her controversial tweets is now commented on the viral Nesamani topic. On seeing the trending hashtag #Pray_For_Neasamani, Gayathri in her tweet wrote “I feel Bad People have lost it now a days. Have gone mad. epic comedy scene to become a silly joke, meme and hashtag unnecessary. #PrayforNeasamani all these unwanted trending. We r going to look like fools Either for our nakkal or vettiness.”

I feel Bad People have lost it now a days. Have gone mad. epic comedy scene to become a silly joke, meme and hashtag unnecessary. #PrayforNeasamani all these unwanted trending. We r going to look like fools Either for our nakkal or vettiness.

Following this she posted several tweets regarding the same. Check out them :

If u think ur doing this against Modi ji. It’s dumb idea. It’s just putting us down and behave like idiots. People all over the world will think we have no brains. First of all most of this scene fans dint get the joke and why is this going around. So stupid.

I feel sorry for fake poralies. U can behave like fools but not everyone in TN r fools.

Pavam all trolls and meme creators. It’s not working With people. it’s only working for those who paid for hashtags and useless trolls. Pathala pathala. Intha comedy only for Vadivel sir and it belongs only to him. When u try to convert it to meme or troll konjam kuda pathala.

These posts made people to troll her and the political party she is backing. Many comments surfaced against her in her own tweet’s comment section. Check out some of them here :

You say the hastag is unwanted but we say pm itself unwanted , you go man why me 🤣🤣🤣🤣

What do you think on these comments of Gayathri ?? Commemt your views below !!

Previous articleBBC World Posted About Our Very Own Neasamani !! You Must See These Reactions !!
Next articleMan Tried To Troll Indian Railways For Vulgar Ads !! Their Savage Reply Went Already Viral !!

On Monday, 11 patients who were getting treatment after getting infected with COVID 19 virus in the ICU of Sri Venkateswara Ramnarain Ruia Government...

Pakistan Fan Insulted Ashwin On His Birthday !! Check How The Cricketer Handled

Chennai based Indian bowling all rounder Ravichandran Ashwin celebrating his 34th birthday on 17th of September. When the entire cricketing fraternity is wishing him...

Directed by Thiagarajan Kumararaja, the screenplay for this film has been co-written by Mysskin, Nalan Kumarasamy, Neelan K. Sekar and the director himself. The...

A 19 year old girl named Jeslin who hails from Kanyakumari, Tamilnadu attacked her ex- boyfriend by hiring goons. She who went to meet...