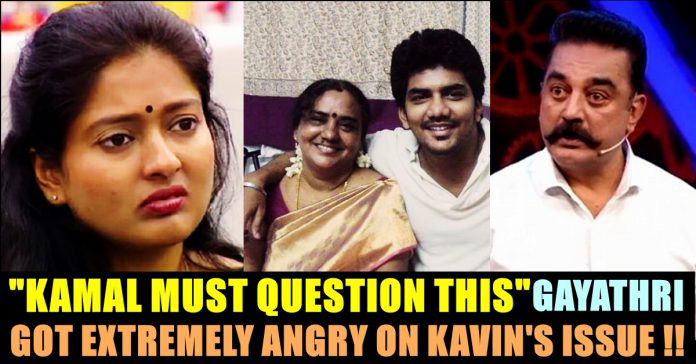 Kavin who gained widespread fame due to his television appearance has grabbed yesterday’s headlines as his family members including his mother sentenced for 5 years of Jail in chit fund cheating case. The news went viral as soon as it surfaced as it is related to Kavin who is being one of prominent participant of popular reality game show Bigg Boss.

Gayathri Raguramm, the contestant of Bigg Boss show in the first season, slammed the media channels for spoiling Kavin’s future by using his name in this issue.

Check out the tweets she posted regarding this :

Let the law do it’s necessary things and involve only the culprit don’t pull family or actors name for Trp.

Chinnathirai union should go to human rights for using his name for Trp when he is not the culprit.

My request to every news channels and website or any form of media. Give only positive news about actors we r just entertainers not criminals. You wouldn’t like your children suffering from depression. Sameway Don’t be a reason for a depression of someone’s children or one’s life pic.twitter.com/VU8wjZQooW

For the uninitiated, a news has surfaced that Kavin’s mother has been sentenced for 5 years jail along with two other family members for chit fund fraud case. The judgement was passed in Trichy court on 29th August.

What do you think on these statements of Gayathri Raguramm ?? Comment your views below !!

Previous articleFirst BIGG BOSS CONTESTANT To React On Kavin’s Mother Getting Sentenced !! Check What She Has To Say !!
Next articleGautham Menon Finally Responds To The Abuses From Fans After All These Days !! WATCH VIDEO !!

Man Asked Chinmayi To Marry Vairamuthu To Solve Everything !! Here’s How Chinmayi Replied!!

Recently Chinmayi has received a harsh open threat from producer K Rajan, at the audio launch of Para which took place on Saturday evening. Since the...

Actress Amala Paul who is known for being bold in on and off screen was last seen in Director Rathna kumar's "Aadai". Her personal...