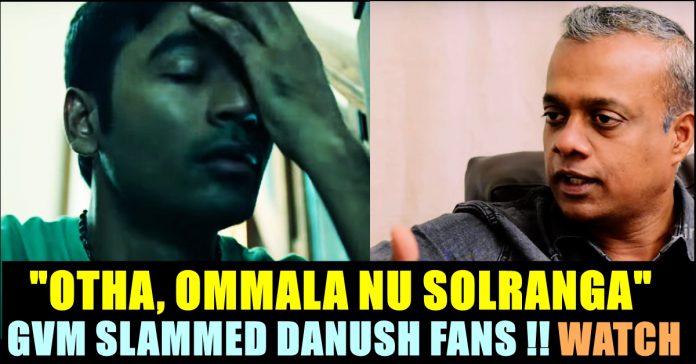 Danush starrer Enai Noki Paayum Thota (ENPT) is ready to see the light of day. The Dhanush-starrer which has been in cold storage for almost two years has finally gotten a confirmed release date. The film is all set to hit theatres on September 6.

The makers of the film have also released a new teaser. In the 2-minute long video, we are shown glimpses of Dhanush and Megha Akash’s characters and their love story. Megha Akash plays the role of an actress, Lekha, while Dhanush is a regular guy who falls in love with her. Sasikumar, who is playing Dhanush’s older brother, is also introduced in the clip.

As the movie is nearing its release, Gautham Menon has accepted to appear in an interview after a very long time. Gautham who has a separate fan base for the films he made, severed due to the interruption in his filmmaking career because of financial crisis.

Fans of top actors Danush and Vikram with whom Gautham has made Enai Nokki Paayum Thotta and Dhuruva Nakshathiram, didn’t think on sparing him in twitter irrespective of the posts he upload. Even if we go and check the comment section of any post he posted in past few days, we can see many comments abusing the director for not giving any update about the films which are already shot.

Now, the director has decided to reply to all the abusers who did abusing all these days just because he directed their favourite actor. “They never given any respect to me to ask update about the film. All they do is abusing to get update from me. That is something which I couldn’t understand. This is my film. Without me screening the trailer, they wouldn’t have known about the film at all. It is me who responsible for the film as I signed and bought money to do it. Considering these aspects, how could I able to reply to the fans of Hero who abuse me to get an update. Do they know what am I going through ??” asked Gautham menon in the interview with Sudhir.

“Yes, I am making the film only for you. But the process of filmmaking is mine and you must let me to complete it.” he added in the interview.

Previous articleGayathri Raguram Got Extremely Angry On Knowing About Kavin’s Issue !! Check Why !!
Next articleSamantha Got Trolled By Her Own Fans For Posing Like This In This Recent Post Of Her !! Check Out!!

BIGG BOSS Vaishnavi Shared Screenshots Of People Abusing Her !! Here’s How She Replied !!