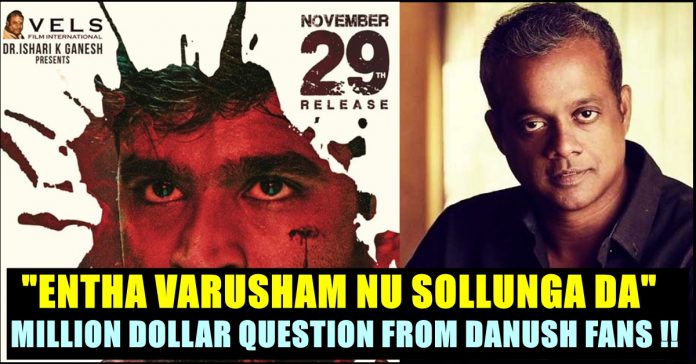 Danush starrer Enai Noki Paayum Thota (ENPT) is ready to see the light of day. The Dhanush-starrer which has been in cold storage for almost two years has finally gotten a confirmed release date. The film is all set to hit theatres on November 29 by Vels Films International.

Now the filmmaker came up with a news release date for his upcoming film, announcement of which he made in his official social media platforms. Check out his post below :

Though many fans welcomed the announcements, few decided to troll the filmmaker for its delay. Few sarcastically said that Gautham didn’t mention the year deliberately. Check out some of their reactions below :

In one of a recent interview, Gautham Menon, ina way of replying to all the trolls said ““They never given any respect to me to ask update about the film. All they do is abusing to get update from me. That is something which I couldn’t understand. This is my film. Without me screening the trailer, they wouldn’t have known about the film at all.”

“It is me who responsible for the film as I signed and bought money to do it. Considering these aspects, how could I able to reply to the fans of Hero who abuse me to get an update. Do they know what am I going through ??” asked Gautham menon in the interview of Sudhir Srinivasan.

What do you think on these comments faced by Gautham Menon ?? Comment your views !!

Yuvraj Singh Fumed About The Irresponsible Shots Of Pandya & Pant !! Check What He Has To Say !!

India is in absolute pressure as they have lost their top three wickets for just 5 runs in the world cup semi finals.  After...

After multiple accusation on director Atlee regarding plagiarism of plot, scenes and graphics, now to our shock, the mannerism of the protagonist has also...

For doing his job, a fan of former Indian captain Dhoni confronted Simoun Doul, a cricketer turned commentator who is currently involved in commentating...

Your childhood memories are usually attached to some superstition or false belief that people around you tried to instill in your head. Whether it...