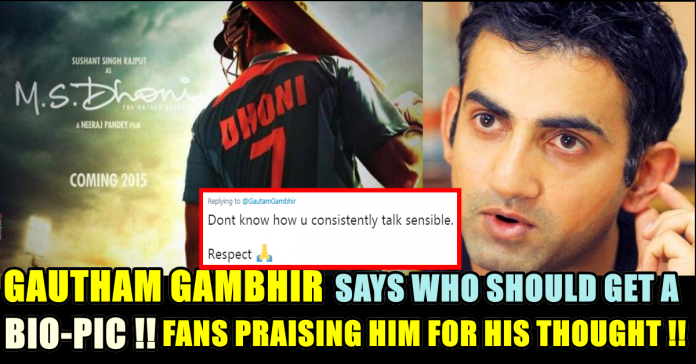 Former Indian opener Gautam Gambhir, who is known for his patriotic sentiments, on Friday, July 27, paid tributes to former Indian president APJ Abdul Kalam on his third death anniversary saying he deserved a biopic. Kalam, a scientist who served as the 11th president of India and was known to be India’s ‘Missile Man’. It was for his key role in developing of India’s missile technology and Pokhran II nuclear tests. Kalam died on this day while delivering a lecture in an institute in Shillong, Meghalaya. He was 83 and conferred with several state awards, including the Bharat Ratna in 1997. Twitterati supported Gambhir’s idea though there were also mentions of the film ‘I Am Kalam’ about a poor boy’s aspirations. That award-winning film was released in 2011 and was specially screened at Kalam’s residence in Delhi. “No one deserves a biopic more than this great man Bharat Ratna dr. Abdul Kalam. True inspiration to every Indian,” Gambhir, 36, said in a tweet.

India has seen a spate of biopics in recent times being made on a number of luminaries. Recently, biopics were made on a number of former Indian captains including Mohammed Azharuddin, Sachin Tendulkar and Mahendra Singh Dhoni. Very recently, a biopic was made on controversial actor Sanjay Dutt and former Indian hockey captain Sandeep Singh, it also received a wide applause. No one deserves a biopic more than this great man Bharat Ratna dr. Abdul Kalam. True inspiration to every Indian.

[wp_ad_camp_1]
Once, Gambhir and Dhoni were present among others at a school in Tamil Nadu when Kalam went there. Despite the presence of the popular cricketers, it was the late president who won the biggest accolade from young students who met him on that day. Great Idea Gauti…. His Biopic will be truly inspiring.
someone from the Film Industry should take your suggestion seriously.

I think Nawazuddin will be perfect for d role…

Absolutely…..only deserving person…but who will make…the so called intellectuals and communist filmmaker lobby doesn’t love him…they always promote who r against our nation!!!

Yes sir…he is all time inspirational to all the youth.

Everyone in India has rights to do their biopic , of course the missle man deserve s the best ,