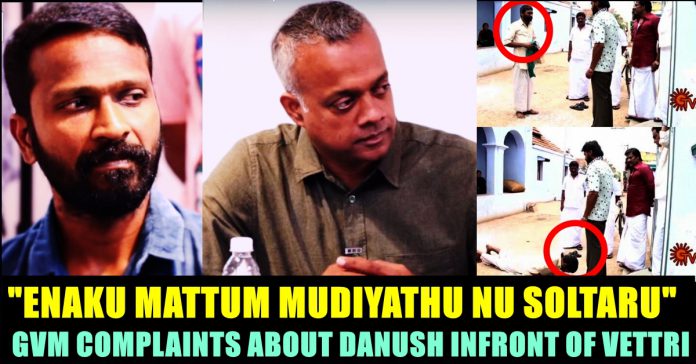 The youtube platform Film companion South has brought 6 prominent filmmakers of this decade under one roof for a round table interview. Director Parthiban, Gautham Vasudev Menon, Vettri Maaran, Rathnakumar, Lakshmi Ramakrishnan, Chezhiyan were the filmmakers who took part in the discussion. They conversed about many advantages and disadvantages of new age cinema which helped us to understand about their way of looking their craft.

Starting from the significant trend that changed Tamil cinema in this decade to how mass hero’s films are ruining Tamil cinema to get into the next level, all the filmmakers were seen very much involved in the discussion. Meanwhile Vettri Maaran and Gautham Vasudev Menon who did their last film with actor Dhanush were also present in the discussion which made the ENPT filmmaker to open on Dhanush’s way of approaching directors.

When host of the show Baradwaj Rangan appreciated Dhanush’s decision to act in the scene where he supposed to get apologize from several people by falling in their feet in Asuran, Gautham intervened and said that it is a job of an actor. “It is astonishing me to see you telling such things. An actor should change the mindset of the audience. They are actors, they can’t beat up 10 people” said Gautham who went on to add that Dhanush denied to do certain things in his film.

“I admired his acting in the film Asuran but it my film he denied to do certain things. I am saying this honestly, I felt a quite surprised when he did it. I helped me to understand that he did it in Asuran because of the rapport between himself and Vettri but it didn’t happen to me” said Gautham in the discussion.

Before ENPT, The last time Gautham saw a release in Kollywood was in 2016 through Simbu starrer Achcham Enbathu Madamayada. For the past 3 years, there were many updates kept surfacing about his next venture as director and as Producer as well. Unfortunately, none of them saw its release since 2016 including Enai Nokki Paayum Thotta, D16 fame Karthik Naren’s directorial Naragasooran, Selvaraghavan’s directorial Nenjam Marapathillai. The reason behind these hurdles is nothing but the financial crisis he has been facing. However the director is now hopefully in the new phase of his directorial career with the help of Vels films international.

What do you think on this expression of the filmmaker ?/ Comment your views below !!

Previous article“Why Are They Wishing Me On Christmas?” Woman Complained !! Young Actor Replied !!
Next articleKangana Ranaut Schooled By This Young Educated Protester !!

Tamil nadu government has officially implemented complete lockdown in the state to prevent the spread of the COVID 19 virus. Chief minister MK Stalin...

This Talented Hero To Act As Villain In Mankatha 2 ??

Mankatha is one of the biggest hit for actor Ajith kumar in his acting career. It became the 50th film of the...