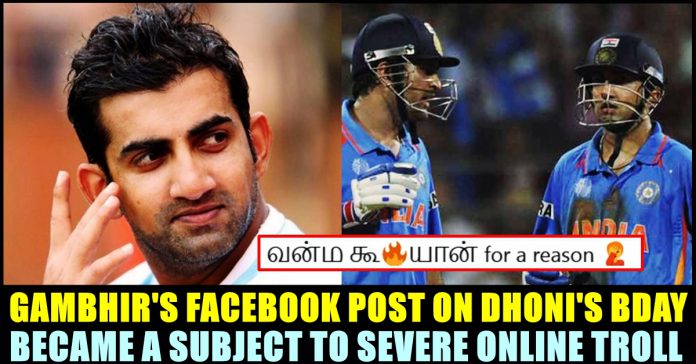 Online activities of former Indian player and current BJP politician Gautham Gambhir came under scanner as he made some significant changes to his official Face book profile on the birthday of former Indian captain Mahendra Singh Dhoni. He changed his Facebook cover picture into his half century celebration from the finals of World Cup 2011. Gambhir often expressed his displeasure over people crediting Dhoni for the victory of India’s victory in the finals of 2011 World Cup and this online activity of the cricketer on Dhoni’s birthday became a subject to severe online trolls and criticisms.

On Wednesday, former Indian captain Mahendra Singh Dhoni turns 40 and is receiving wishes from across the country. Several cinema celebrities, players of Indian cricket team and other teams, Politicians, influential personalities from various fields are wishing the “captain” cool on this special day of him. However, Gautham Gambhir who hasn’t wished Dhoni for his birthday, through his official social media handles yet, has been uploading pictures of himself and changing cover pictures. On 3rd of July, he wished Harbhajan singh for his birthday through his official twitter handle.

Gambhir changed his facebook cover picture to this today I- 😭😭 pic.twitter.com/ZzwYC7Jeoq

“If you are going to be salty, be as salty as Gautam Gambhir…. Go big or go home…” wrote a social media user, reacting to the Facebook cover picture of Gambhir whereas another one asked “Yes, you could be salty but could you ever be Gautam Gambhir level salty?

If you are going to be salty, be as salty as Gautam Gambhir…. Go big or go home… pic.twitter.com/IbWGscyCH4

Everyone wishing dhoni on his birthday #HappyBirthdayMSD
Le gambhir pic.twitter.com/hseNrdU6IJ

In the year 2020, popular sports channel ESPN posted a picture of Dhoni hitting six on 2nd of April and said “On this day in 2011, the shot that sent millions of Indians into jubilation”. Replying to the tweet, Gambhir said that the world cup was won by the entire Indian team, not by Dhoni’s six alone. He asked the ESPN cricinfo page to hit their obsession to a six. “Just a reminder ESPNcricinfo : #worldcup2011 was won by entire India, entire Indian team & all support staff. High time you hit your obsession for a SIX.” the cricketer wrote in his tweet.

Previous articleWATCH : Know How Vijay Reacted After Seeing Kavin As An Assistant Director Of “BEAST” ??
Next articleICC Termed Dhoni As “Quickest Hands” In The East !! Sangakkara’s Reply Goes Viral

People who belong to cinema industry also using cab services of private companies such as Ola and Uber. We have came across many issues...