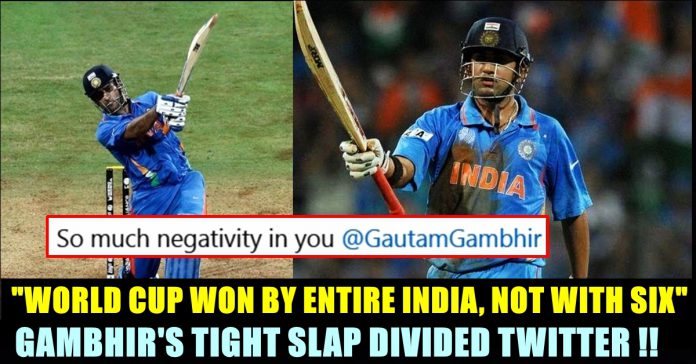 India clinched the world cup of 50 over One Day International for the first time on this same day of year 2011. The match which took place between India and Sri lanka, was won by the blue team comfortably with Gautam Gambhir and Dhoni’s stellar performance. Gambhir’s fighting 97 to build the initial score and Dhoni’s 91 to finish the chase got India the cup after 28 long years. Now, on this second day of April month, popular sports channel ESPN, posted a picture of Dhoni hitting six and said “On this day in 2011, the shot that sent millions of Indians into jubilation”

#OnThisDay in 2011, the shot that sent millions of Indians into jubilationhttps://t.co/bMdBNFxggl pic.twitter.com/PIOBaLRRIH

This controversial tweet exploded the micro blogging social media site as many people started reacting to it in several ways. Gautam’s crucial 97 under pressure is always considered as an underrated one. The cricketer who attacked the powerful bowlers of Srilanka such as Malinga and Nuwan Kulashekara, stitched a crucial 83 run partnership with Virat Kohli. He went to add a 99 run partnership with Dhoni to steer Team India towards the winning goal. However, he couldn’t get past the winning line as he got out for 97, the innings of his lifetime.

Check out some of the reactions his tweet is receiving :

He never gets credits for his performance…Gautam Gambhir played a major role in the victory.

Without dhoni 91 .gambhir wouldn't have done anything @GautamGambhir

What do you think this counter attack of Gambhir and these reactions for his tweet ?? Comment your views below !!

Vishnu Vishal Replied To The Accusation Of Actor Soori !!

After actor Soori made a shocking allegation against producer Anbuvel Rajan and Ramesh, actor Vishnu Vishal's father, the "Jeeva" actor came up with a...