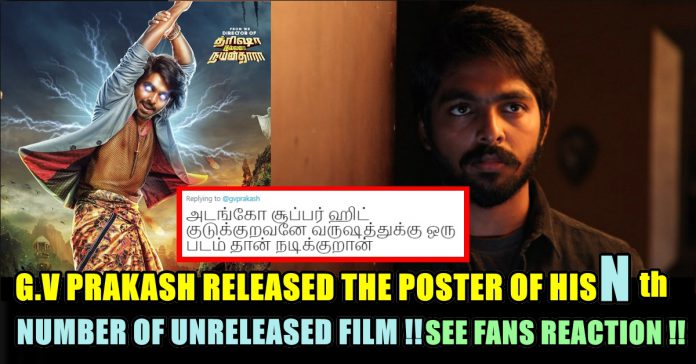 As we know, director Adhik Ravichandran of ‘Trisha Illana Nayanthara’ and ‘AAA’ fame, teamed up with G.V.Prakash for his third project. Featuring Amyra Dastur, Sonia Agarwal, and Sanchita Shetty in important roles, the film has cinematography by Abhinandhan Ramanujam.

Adhik’s films are always known for its trendy and catchy titles and this time too, the director has made sure that the title of his film goes viral and gets connected with today’s youngsters.

The first look poster of the film features a lungi-clad GV Prakash Kumar drawing lightning from the sky while meteors appear to be crashing to earth as well a howling dog- all the quintessential horror elements. He also points him middle finger at the sky which indirectly denotes that the film might be an Adult film as this combo succeeded in that previously.

Look at the poster here :

As the audience have witnessed so many posters and first looks of G.V. Prakash’s upcoming movies they seemed a bit bored of his posters and started trolling him for this poster. The unreleased films of G.V Prakash are 100% Kadhal, Sarvam Thalamayam, Jail, Adangathey, Kuppathu Raja, 4G, Ayngaran. Now this film Kadhalai Thedi Nithya Nandha added to the list which made the fans troll in big time. This controversial combo of G.V Prakash kumar and Adhik Ravichandran may instigated them as well which we can see through the comments :

GV Prakash is good actor and good human. No doubt about it but he fails in choosing good directors. Hope, this film would not be like Trisha Illaina Nayanthaara. Expecting nice and decent film to be watched with family from you

Ivan vera comedy panitu ! Wonder who watches his movies on screen. Should have stuck to music.

Better u can avoid this . Title itself don’t like. We know that u are making this kind of movies for entertainment. But seriously do u think it will guide youngsters in right path. G. V iam also huge fan for your music but not for this.. Do some family movies

What do you think on this film’s title and first look ?? Let us know !!