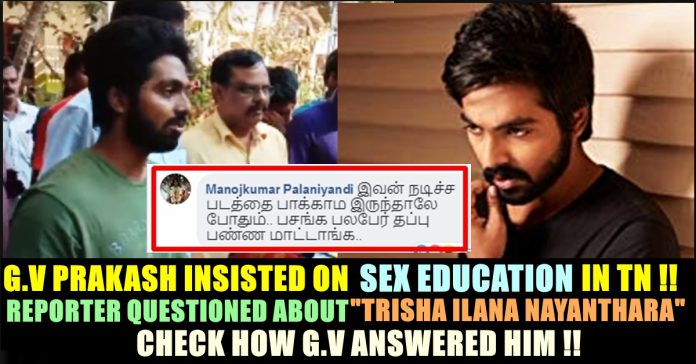 G. V. Prakash Kumar is an Indian actor, a composer of film scores and soundtracks, and a producer and singer. He has predominantly scored music for Tamil films. His first film was S Pictures’ Veyyil.

He turned as hero through a movie named “darling” which is a horror thriller and was received well by the audience. Following that he was roped in many movies as protagonist where most of them contained horror comedy or adult comedy. His movies such as “Trisha Illana Nayanthara” did well in the box office and also instigated a separate set of audience to go against for it’s adult content. Recently G.V Prakash took part in a promotional activity of  his recently released movie “Watchman”. He went to a school and interacted with school kids and advised them to behave good and also asked them to watch the movie if they have time. The production house of the movie also gave 40 CCTV cameras to the Pollachi Police Stations.

After interacting with the kids, G.V Prakash had a press meet with media people. In the press meet G.V Prakash insisted that sex education should take place in the educational system of Tamilnadu. He also said that many foreign countries implemented it and teaching kids about the good touch and bad touch.

Meanwhile one of a reporter about G.V whether the movies he represents also being one of the cause for degrading women in the society ?? To this G.V Prakash stumbled a bit and said that film industry should also deal it with care and also added that he is avoiding such things in his movies.

Check out some of the reactions for this post :

He also asked people to come and watch his movies with their families as it was given “U” certificate by the censor board.Watchman is a 2019 Tamil crime thriller film written and directed by A. L. Vijay. The film stars G. V. Prakash Kumar in lead role as well as the music composer for this film, reuniting with Vijay since their last film, Idhu Enna Maayam (2015).The film stars Samyuktha Hegde as the female lead also stars Yogi Babu and Raj Arjun in supporting roles.

What do you think on this statement of G.V Prakash ?? comment your views below !!

Previous articleThis Rajinikanth’s Heroine Termed Dhoni As “God Of Cricket” !! Here’s How Her Followers Reacted !!
Next articleImran Tahir Describes Dhoni’s Terrific Innings In His Very Own Style !! Check Out !!

Suriya Got Emotional On Hearing These Words From Director Vasanth !!

Having an experience in film industry for more than 23 years, Suriya is being considered as one of the finest actors in Tamil cinema...