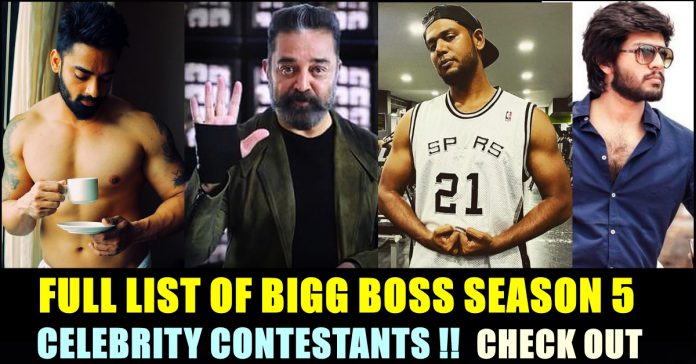 With just 5 days to go for the inaugural episode of Bigg Boss season 5, a list of the final confirmed contestant has been surfaced with many known celebrities being included to the already confirmed list. It has been officially announced that season 5 of Tamil Bigg Boss is going to be launched from 3rd of October and fans of the show are eagerly waiting to witness the 15 celebrity contestants which will be revealed only on the inaugural. However, speculations are doing rounds in Internet constantly with many reacting on how the show would be if their favourite celebrity enters the house as a contestant.

Senior actress Priya Raman who quit “Sembaruthi” serial is highly expected to enter the Bigg Boss house. Malaysian model Nadiya’s entry has been confirmed by reliable sources. Actress/ Transgender Model Namitha Marimuthu, Runner up of “Villa to Village” show Akshara Reddy are some of the celebrities who are believed to enter the Bigg Boss house as contestants along with the already confirmed contestants.

Vijay TV anchor Priyanka’s participation has been confirmed and Veteran actress Aishwarya is also expected to enter the Kamal Haasan hosting show. Abhinai Vaddi, grandson of late actor Gemini Ganesan is going to participate in the show, according to a source. Pavani Reddy of “Chinna Thambi” serial fame is entering the 100 days show.

Actor Sibi Bhuvanachandran who acted as a student in Vijay’s “Master” has signed the agreement to participate in the cash-rich reality show. Apart from these celebrities, actress Shalu Shamu, Shakeela’s daughter Mila, Model Gopinath Ravi were approached and their participations are also highly expected. “Imman” Annachi who appeared in a number of films as comedian, has been added to the list of confirmed contestants. Yashika’s ex-boyfriend Niroop has been approached, according to sources.

It was recently reported that VJ Abishek who is popularly known as “Cinema Paiyyan” is going to take part in the show as one of the contestants. The news came in as a shock to the fans of Bigg Boss show and online users as Abishek is pretty much famous for his impulsive behaviour. He who interviewed almost all the top celebrities of Kollywood, has a separate fan following for the way he reviews movies. He also acted in a film named “Imaikaa Nodigal” as a best friend of Raashi Khanna.

Season five of Kamal Haasan hosting Bigg Boss show is all set to stream from 3rd of October. Amidst the rumours that took place about the change of host in the upcoming season, Kamal appeared in a number of promos and kept a full stop to the baseless rumours. Now, speculations on the 15 celebrity contestants are going on in full swing with many naming several known celebrities as probable contestants. However,, we have to wait till Sunday night to known the 15 celebrity contestants who are going to spend their days inside the Bigg Boss house.

Previous articleJournalist Panimalar Lashed Out At Online Harassers !! Exposed A Culprit
Next articleYoung Actor Getting Trolled For Commenting On Anupama’s Post !!

The impact made by the popular video of Vanitha Vijayakumar and Lakshmy ramakrishnan having argument over Vanitha's recent marriage is reflecting in social media....

After successfully winning the second test against team England, All rounder Ravinchandran Ashwin who recieved the "Man of the match" award, interacted with his...