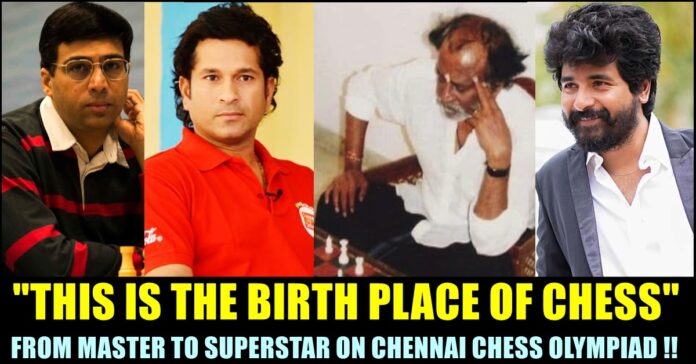 While the inaugural function of 44th Chess Olympiad is taking place in full swing with the presence of Tamil Chief minister MK Stalin, Prime minister Narendra Modi, Tamil Superstar Rajinikanth and others, many celebrated personalities including legendary cricket player Sachin Tendulkar expressed their excitement over the event being taken place in our soil. Before making his presence in the event with his daughter, Superstar Rajinikanth uploaded a picture in his twitter handle which showed himself playing the indoor game.

The actor said that it is one of his favourites games an welcomed the event. Prime minister Narendra Modi appeared in the event by wearing Tamil traditional wear Vetti and Shirt with the pattern of chess board etched in it. With Child Prodigy Lydian Nadhaswaram playing piano in front of the guests, a video explaining about Tamil roots through the background voice of Kamal Haasan was played as well.

“The World Chess Olympiad is taking place in the birthplace of chess! It’s a momentous occasion for India. Wishing the entire Indian contingent & everyone taking part all the very best for the tournament” said Sachin Tendulkar through his tweet whereas Superstar Rajinikanth wrote “An indoor game I love the most … wishing all the chess minds the very best .. god bless”

Check out the tweets from some of the celebrities for the 44th Chess Olympiad taking place in Chennai below :

The World Chess Olympiad is taking place in the birthplace of chess! It’s a momentous occasion for India.

Wishing the entire Indian contingent & everyone taking part all the very best for the tournament. #ChessChennai2022 #ChessOlympiad

#ChessOlympiad2022 An indoor game I love the most … wishing all the chess minds the very best .. god bless. pic.twitter.com/nVZ8SU51va

Wishing the best to our Indian chess team for the #44thChessOlympiad 😊👍https://t.co/aERxB1g5Wm

Fantastic opening ceremony for #44thInternationalChessOlympiad organised by our Govt. A big welcome & best wishes to all the players. Superbly put together cultural show by @VigneshShivN showcasing Tamil heritage was the highlight. Congratulations to all the artists & organizers.

Best wishes to everyone for the World Chess Olympiad in Chennai. It’s so good to see India hosting such a prestigious competition.
Go well 🇮🇳#ChessChennai2022 #ChessOlympiad pic.twitter.com/2ue7XwHZFm

It was Russia which was supposed to host the 44th Chess Olympiad and the state government of Tamilnadu grabbed the opportunity of hosting the biggest chess event in the world as soon as the Russians lost the chance due to their invasion into Ukraine. State government of Tamilnadu left no stones unturned to get the opportunity of hosting the event and the result is, players and authorities from several countries has been expressing their admiration over the reception and infrastructure they were provided.

On seeing the arrangements that are made in Chennai for the 44th Olympiad, Spanish Chess Grandmaster Francisco Vallejo hailed the Olympiad Hall in Chennai saying that it looks like the best one he has ever seen and elaborately praised the organizers for giving him the best ever experience.

Painting the Napier Bridge in Chennai in chess colours is such powerful symbolic gesture that the city is welcoming the FIDE Chess Olympiad 2022 with open arms!#chess #chessbaseindia #chessolympiad2022 #chennaichess pic.twitter.com/WKRrNtvmnr

The Chess Olympiad is being held in Chennai for the first time and the tournament is going to take place in Mamallapuram. Players from over 187 countries are participating in the Olympiad with three Indian teams each in the open and women’s sections. Prime minister Narendra Modi inaugurated the event at the Nehru Indoor Stadium on 28th of July in the presence of Tamil nadu chief minister MK Stalin while the matches will begin from 29th July and ends on 10th of August.

To get the opportunity of hosting the event, State Government was pretty much fast in making decisions, said the officials of All India Chess Federation (AICF). While Bharat Singh Chauhan, secretary of AICF said that took the Tamilnadu government just a few hours to decide on hosting the prestigious 44th Olympiad at Mamallapuram near Chennai.