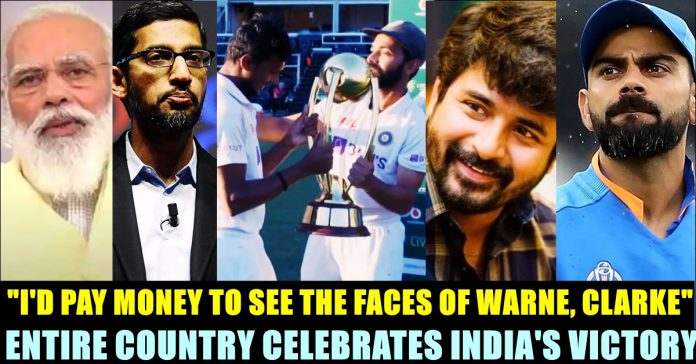 “EVERY SESSION WE DISCOVERED A NEW HERO. Every time we got hit, we stayed put & stood taller. We pushed boundaries of belief to play fearless but not careless cricket. Injuries & uncertainties were countered with poise & confidence. One of the greatest series wins! Congrats India.” wrote Sachin to define the victory of India whereas Virat Kohli wrote “WHAT A WIN!!! Yessssss. To everyone who doubted us after Adelaide, stand up and take notice. Exemplary performance but the grit and determination was the standout for us the whole way. Well done to all the boys and the management. Enjoy this historic feat lads. Cheers “

Google CEO Sundar Pichai wrote “One of the greatest test series wins ever. Congrats India and well played Australia, what a series #INDvsAUS“ in his tweet and made Team India proud.

Check out the tweets below :

EVERY SESSION WE DISCOVERED A NEW HERO.
Every time we got hit, we stayed put & stood taller. We pushed boundaries of belief to play fearless but not careless cricket. Injuries & uncertainties were countered with poise & confidence. One of the greatest series wins!
Congrats India. pic.twitter.com/ZtCChUURLV

For all of us in 🇮🇳 & across the world, if you ever score 36 or lesser in life, remember: it isn't end of the world.
The spring stretches backward only to propel you forward. And once you succeed, don't forget to celebrate with those who stood by you when the world wrote you off. pic.twitter.com/qqaTTAg9uW

WHAT A WIN!!! Yessssss. To everyone who doubted us after Adelaide, stand up and take notice. Exemplary performance but the grit and determination was the standout for us the whole way. Well done to all the boys and the management. Enjoy this historic feat lads. Cheers 👏🏼🇮🇳 @BCCI pic.twitter.com/CgWElgOOO1

One of the greatest test series wins ever. Congrats India and well played Australia, what a series #INDvsAUS

We are all overjoyed at the success of the Indian Cricket Team in Australia. Their remarkable energy and passion was visible throughout. So was their stellar intent, remarkable grit and determination. Congratulations to the team! Best wishes for your future endeavours.

We breach #Gabba! A fortress that has been protected for years! This team has shown absolute grit and resilience. We retain Border-Gavaskar trophy with much style too. What a debut it has been for our own @Sundarwashi5 and @Natarajan_91. Proud moment for us. #India #INDvsAUS pic.twitter.com/ErxA52Uz1I

Eden Gardens might still be the finest Indian fight back I’ve seen..but as an entire series..this is folklore for the rest of cricketing history! Well played Australia..but you just came up against India next gen! Skill, passion and absolute fearlessness! Cricket Gold standard!

From 36 all out in the same series to winning it on Australia soil. Wow. #IndiavsAustralia #BorderGavaskarTrophy https://t.co/V96MdnHCAC

No matter the game style.. if you stay true to your style, victory will never leave you.. ! #RishabhPant ❤️😘#TeamIndia 🔥❤️ pic.twitter.com/DzPDDZBu8V

I would pay good money to see the faces of Warne, Ponting & Clarke.

What a test series it was many congratulations to the team india what an inning by @RishabhPant17 top class bhai . @BCCI @ajinkyarahane88 @RaviShastriOfc 🙌🏻🙌🏻🙌🏻

Congratulations to Team India on the stunning and historic victory against Australia. Fighting against all odds and injuries, our players have shown great courage and resilience to win the series.

Hats off to the champions. Well played Team India pic.twitter.com/MZsL1bcCow

Heartwarming& tears of joy to see a brilliant bunch of our players holding our flag aloft & walking around the Gabba! The year has begun well. A fighting mix of players from all over the country did all of us proud. Well played Indian cricket team. #IndianCricketTeam #AUSvsIND

“It means a lot to us. I don’t know how to describe this, but our boys showed a lot of character and determination after the Adelaide Test. I’m really proud of each individual. The conversation between Pujara and me was that he would bat normal, and I would take it on. It was all about intent. Credit to Pujara, the way he handled the pressure was magnificent. Rishabh and Washington were very good at the end.” said Rahane during the post match.

Rahane hands the trophy over to Nattu!#AUSvIND

“Taking 20 wickets was the key, so we opted for 5 bowlers. Sundar brought the balance in place of Jadeja. The intention was clear to play five bowlers. Siraj played two Tests, Saini just one, so it was inexperienced but the character shown by the bowlers and everyone else was incredible. We didn’t discuss anything about Adelaide. Just played wanted to play the remaining games with good attitude and character without worrying about the result.” he added.

Previous articleAshwin’s Epic Reply To Australian Players Who Underestimated Team India !!
Next article“I Realized Academic Degree Has Nothing To Do With Knowledge” – Sivakarthikeyan Regrets !!

A 19 year old youth died after coming from India Gate with his friends. The reason for his death is bizarre as three of...