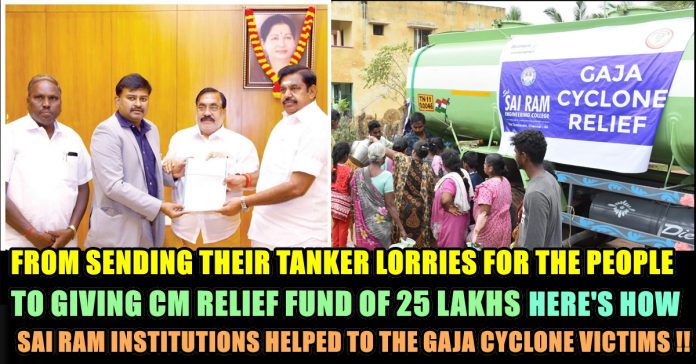 Cyclone Gaja had crossed the Tamil Nadu coast early on November 16 between Nagapattinam, about 300 km from here, and nearby Vedaranyam.

The severe cyclonic storm Gaja has wreaked havoc in the delta regions of Tamil Nadu. The Tamil Nadu State Disaster Management revised the death toll to 46 on Tuesday and estimated that over 251,600 people have been evacuated to over 500 relief camps. Nagapattinam, Tiruvarur and Thanjavur are among the worst-affected regions in the state. 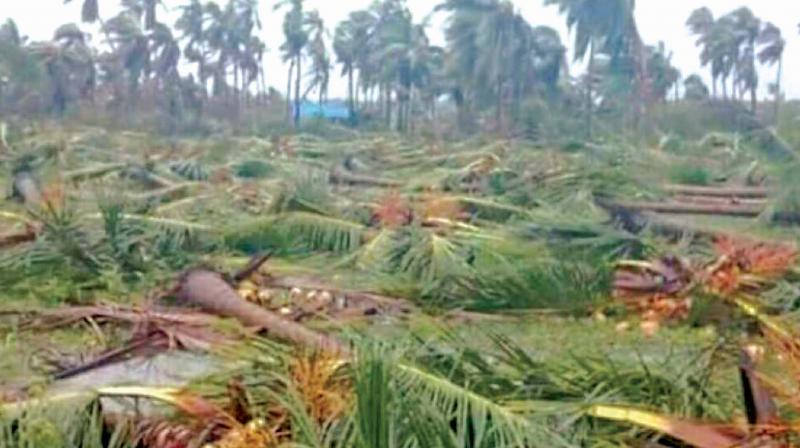 It had claimed 46 lives and left a trail of destruction in over ten districts, including Nagapttinam, Thiruvarur, Puthukottai and Thanjavur which suffered severe damage.

The Tamil Nadu government has already released a sum of Rs 1000 crore for immediate relief and rehabilitation efforts in the affected areas.

Except Government, Celebrities also jumped on the bandwagon via the #SaveDelta campaign on Twitter and are making significant contributions while encouraging their fans to do the same. Apart from Celebrities and Government, many educational institutions came forward to help for the suffering victims in the Delta districts.The first institution to initiate the helping cause by providing drinking water by sending their Tanker lorries to almost all the affected districts was Sairam group of institutions. It is informed that till now SAIRAM INSTITUTIONS have distributed 150 loads water by the Tanker Lorries (capacity 12000 litres) in the 80 villages in and around Thiruvarur and Pudukottai Districts at GAJA Cyclone affected areas. The Sairam Institutions began in 1989 with the start of Sai Matriculation Higher Secondary School in Chennai with just 137 students. Today the Sairam family encompasses more than a dozen institutions including School, Engineering colleges, Medical colleges, Teacher Training institutes and Polytechnic. As soon as knowing about the disaster, Sai Prakash, CEO of Sairam institutions decided to give access of his school in Thiruthuraipoondi for the people to stay. The classrooms in this school was also used for stocking and distributing the relief materials. Relief material stocks worth about between 25-30 lakhs were purchased and being provided to the victims of Cyclone Gaja.

CEO of Leo Muthu trust & my dear BIL Sai prakash has been a pillar of support from the day #Gaja hit #Delta. Hailing from Thiruthuraipoondi he understood the pain. Thanks to all the beautiful ppl at #Sairam for the health camps & aid for #Mannargudi #மன்னார்குடி #கஜா #SaveDelta🙏🏼 pic.twitter.com/E7NY1Alfo1

Through Sri Sairam Siddha Medical College & Research Centre, they also conducted medical camps in the villages that are affected by Cyclone which are located in interior parts of the district. It is also reported nearly 30,000 victims got treated through these medical camps. Those camps psychologically strengthened the mind state of the suffering people as well. Many educational institutions got inspired by Sairam and came forward to help for the victims. The process of providing help was progressed by gathering information from the Sairam studying students who belong to the affected districts. The students informed to the college faculties about the destruction after talking to their parents in the delta districts which acts as major information source for this relief activity by Sairam. Overall it is informed that approximately 75 Lakh Rupees spent by Sai Ram group of institutions for the people of Delta districts in this Gaja cyclone. It is really heart warming to see such a gesture from Sai Prakash. It sure will be an inspiration for many institutions and public people to come forward in order to help those victims of disaster.

Previous articleCricketer Dinesh Karthik Fell In Love With This Film Of Vijay Sethupathi !! He Recommends Other Players As Well !!
Next articleVishnu Vishal Got Really Angry & Lashed Out On Media !! Check Out The Reason !!

Actor Jayam Ravi who is currently busy promoting his upcoming magnum opus "Ponniyin Selvan" of Manirathnam, in an event that was arranged for him...

Reviewing a hotel, restaurant and even a movie we watched lately on social media became common in this digital era. Rating our experience at...