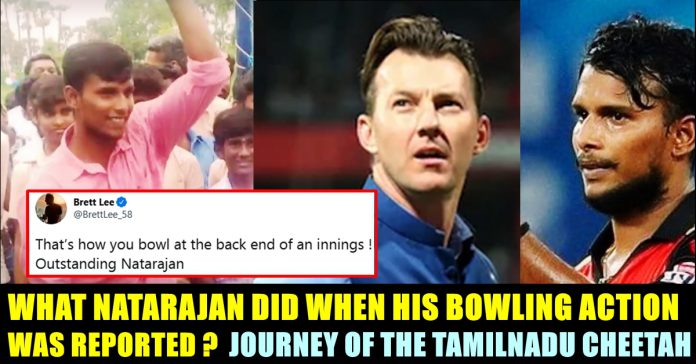 The 18th over Natarajan Thangarasu bowled against the Delhi capitals might not feature in the highlights package. The score card won’t show you the vital over he bowled. But if you are an ardent cricket who watch every match keenly, you will know how the Tamilnadu lad won the match for his team with his variations.

When Natarajan got the ball in his hand, the Delhi side needed 44 runs from three overs. The first four balls he bowled were perfect yorkers through which Axar and Stoinis managed to get only singles and twos. In the final delivery, which is also a yorker, the left arm seamer knocked the Australian all rounder down who smashed the Kings 11 Punjab bowlers for cleaners a week ago. By giving just 7 runs in the over, Natarajan picked the wicket of dangerous Stoinis.

In his 4 overs, Natarajan gave just 25 runs away with an economy rate of 6.25. On seeing his performance, cricket observers including legendary Brett lee are lauding the 29 year old. “That’s how you bowl at the back end of an innings ! Outstanding Natarajan” he wrote in his tweet.

That’s how you bowl at the back end of an innings ! Outstanding Natarajan

Absolutely brilliant from Natarajan. Best use of the yorker so far in this tournament.

As we all know, Natarajan Thangarasu is a Tamilian who belongs to a small village named Chinnappampatti of Salem which is located 340 Kms away from Chennai. People of his place consider him as their “Chella Paiyan” as anyone would show directions to his house if we visit the area.

Natarajan’s father is a Saree weaver and his Mother ran a road side shop where people fell in love with her beef fry. He was the eldest of his five siblings. In the year 2011, Natarajan came to Chennai from Chinnappampatti to pursue his cricketing career. In his earlier days, Natarajan represented several villages in the tennis ball tournaments. Natarajan is a big name among the villages for his performance in the 6 over a side Tennis ball tournaments.

Natarajan’s unique bowling style to deliver which he uses his left hand, gained him the enough attention. With a little knowledge about cricket ball, he reached Chennai. After reaching Chennai, with his hard work, Natarajan got a place in BSNL club team. Few months later, he made it to the second division of India cements. In two years time, Natarajan got a place in the first division.

With his Tennis ball skills, Yorkers came naturally to him. Impressing Jolly Rovers with his bowling ability, Natarajan made it to the Tamil nadu Ranji team in the year 2015. Soon after seeing the biggest break of his career, Natarajan’s bowling action was reported. The dejected cricketer didn’t give up. He started concentrating on correcting his action.

The very next year, the cricketer, with a new action cleared the tests and participated in the TNPL. The world got a chance to witness his talent. He impressed the management of Mumbai Indians with his performance against Tuti Patriots. He bowled six yorkers in the super over of that match.

Including Mumbai, Many teams tried to buy him in the auction. The cricketer threw his name for just Rs. 10 Lakhs and ended up being bought for Rs. 3 crores by the Kings 11 Punjab team. However, his stint with the team didn’t go well and he also had a language barrier with the team members. After SRH bought him for a base price in the year 2018, the cricketer had his sigh of relief on seeing Tamil speaking Muttiah Muralidharan there.

Everything he earned from cricket, Natarajan giving it back to the sports by running a free academy in his village. He doesn’t charge the 50-60 students who are learning the sport there. The academy is well received among the Tamil nadu players and is expected to get a wide reach from this year as he looks promising in the ongoing IPL tournament. Let us wish him the very best to perform well in the upcoming matches and seal a permanent place in the national team soon !!

Previous articleHow Caste Discrimination Turned Into A Sexual Violence In Hathras ??
Next articleTop Hero’s Daughter Humiliated For Her Skin Colour ??

The Central Bureau of Investigation (CBI), in an unprecedented development, conducted raids inside its own headquarters and arrested Deputy Superintendent of Police (DSP) Devinder...

As an unexpected twist in the tale, reports emerged saying that Youtuber Madan's wife Krithika got arrested by the Police officials. It has been...