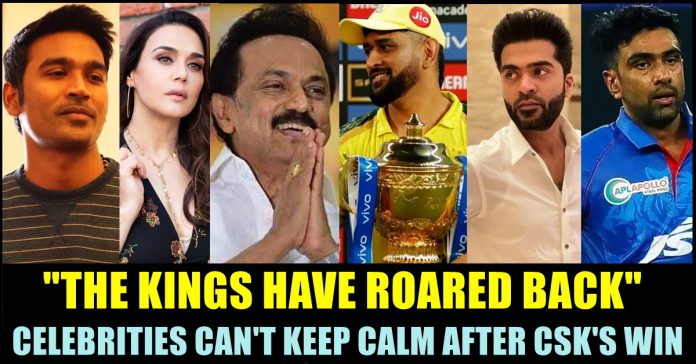 Team Chennai Super Kings won the IPL trophy for the fourth time in the 14 editions and made fans extremely happy. From finishing the league stage at 7th spot in IPL 2020, the team managed to lift the trophy by making a solid come back in the next season. The Dhoni led team comfortably won the match against Kolkata Knight Riders in the finals by 27 runs and won the winning cash prize of Rs.20 crores.

In the post match presentation, Dhoni gave credits to team KKR for the way they throughout the tournament. He also credited them as a “deserving” team to win the trophy for the performances they pulled out to reach finals. The former Indian captain who is going to mentor team India in the T20 world Cup, also hinted that he will be playing the next season by saying that he hasn’t left the legacy behind still.

“If any team deserved to win the IPL this year, I feel it was KKR. I think the break helped them. Coming to CSK we shuffled a few players, we used them in different ways. Important was to take the responsibility. I felt we had match-winners game after game. People who were in form they ensured they were scoring throughout the tournament and others were chipping in. Every final is special. Yes we are most consistent team looking at the stats but we have also lost finals. Not letting the opposition in is something we consciously wanted to improve. I hope CSK in the coming years will be known for that” Dhoni said in the post match presentation.

“I would love to thank the fans. We are in Dubai now. Even when we played in South Africa, we always got good amount of support. Thanks to all of them. If feels like Chepauk, Chennai. Hopefully we will come back to play of the Chennai fans next year” he said to while addressing the fans. When Harsha Bhogle asked about his retention in CSK for the next year, Dhoni said that it is not about himself featuring in the team but what’s more important is to look the future of the team. He wanted to make a team for CSK for the next ten year. When Harsha concluded by “thanking” Dhoni for the legacy he left behind, the cricketer, in a laughing manner said “Still I haven’t left behind” to confirm that he is going to play for CSK in the upcoming edition.

As far as the celebration is concerned, entire Tamil Nadu is painted with yellow for the victory CSK pulled off. Enormous number cinema celebrities, political personalities, sports individuals, former cricketers, business men are celebrating CSK’s victory along with fans. Tamil Nadu chief minister MK Stalin came up with a tweet writing “Fantabulous performance from @ChennaiIPL! The kings have roared back. Congratulations to each and every #CSK player and fans across the globe on winning the #IPL trophy for the fourth time. Chennai is waiting #AnbuDEN for @msdhoni to celebrate this victory!” with many others celebrating the yellow team’s victory.

Check out some of the reactions that surfaced in Internet after CSK’s victory :

The kings have roared back.

Congratulations to each and every #CSK player and fans across the globe on winning the #IPL trophy for the fourth time.

Congratulations to #CSK for the 4th #IPL title, #IPL2021. What a vibrant season of #IPL and a feast for cricket lovers. Special mention to @msdhoni and all the players! #fabulouswin #cskvskkr2021 #msdhoni #Yellove pic.twitter.com/Ptvpbb6tb3

Remembering Shane watson’s innings with his knee bleeding !! FAF , Gaikwad , uthappa, jadeja and finally the one and only one enga thala dhoni ku ……. 🥳🥳🥳🥳💥💥💥💥👑👑👑 #CHAMPIONS

What a match! What a feeling! Our boys have brought the trophy home! #CSK 🔥 pic.twitter.com/HwntvBqrWl

Congratulations to @ChennaiIPL on winning the #IPL @msdhoni 👏🏽👏🏽👏🏽

The Lion .. as TOI says “IPL success requires game awareness, an attribute which the Man from Jharkhand and the heartthrob of Tamil Nadu possesses abundantly.” Well done CSK.. thank you for proving that experience and humility make great champions at any age. ❤️❤️🙏 pic.twitter.com/pZ4ggoKHP8

Congratulations @msdhoni and @ChennaiIPL on the 4th title.🏆🏆🏆👏👏👏. #IPLFinal #cskvskkr2021
Lots to learn from this campaign of @KKRiders, great turn around.

Congrats #CSK for winning the #IPL2021 trophy. What a turn around from last season. All credit goes to @msdhoni for his leadership. Must appreciate #KKR for playing amazing cricket & making it to the finals. Tonight is a great example of how experience & leadership matters. pic.twitter.com/AjtI6GQWmX

I mean, they pretty darn good 👍

Congrats #CSK! Our lions roar & how! We are champions 🏆 again! The brilliance & sportsmanship of #CSK is only matched by the dignity & humility with which the team conducts itself at all times! This #CSK unit is a class act! After all, it is led by a true sport called #MSDhoni

A family called CSK and the families of CSK.

Previous articlePopular Movie Reviewer Raised Voice Against Theatres For Not Allowing Visitors Outside To Eat !!
Next articleAnupama Replied To Fan Who Asked Her To Pose In “Bikini”!! WATCH

Through filing nomination from Coimbatore South for the upcoming assembly polls which is scheduled to take place on 6th of April, actor turned politician...